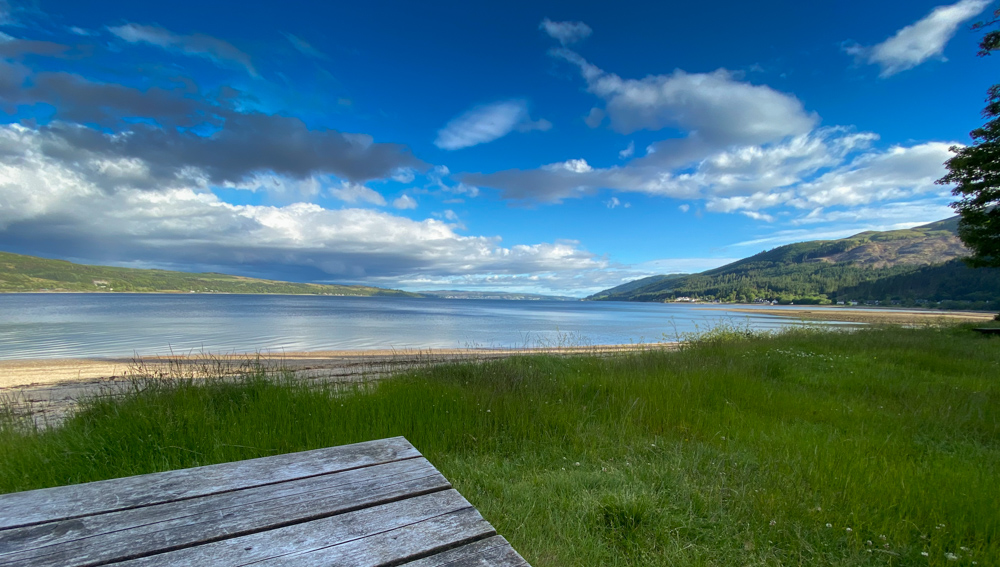 On Thursday 1 April Forestry and Land Scotland (FLS) held an open online meeting with the Ardentinny community, the context of which is as follows.
The FLS – owned, designated picnic site at Ardentinny beach has been unofficially used as a campsite over several years, attracting its fair share of anti-social behaviour. Last year, post first lockdown, the situation became critical. There were in excess of 84 encampments in cramped conditions with insufficient facilities, no protocols in place for social distancing or visitor data collection, and no on-site management.
Community consultation
In October 2020, in response to local objections and representations from our MSP and other officials, FLS engaged in a community consultation on a variety of proposals for the area. The community heard nothing further until it received a letter at the end of March 2021 outlining a proposed planning application for visitor management around Ardentinny beach and announcing Thursday’s meeting to discuss it.
FLS plans
Approximately 40 people attended online and by phone. Stuart Chalmers, FLS Regional Visitor Services Manager opened the meeting and began a visual presentation of their proposals. He stressed the purpose of the meeting was to give the community the opportunity to look at FLS plans for the 2021 visitor season, for which they are about to submit a planning application, and to invite questions and receive comments for consideration. However, it was not a forum to present objections. There will be an opportunity to do so to The National Park (NP) after the planning application has been submitted.
He highlighted that one of the key pressures among the 15 visitor sites within the NP was that of antisocial behaviours associated with camping in Ardentinny. There were also other issues such as irresponsible parking; litter; damage from fires and they fully expect this year to present a similar level of problems. As a result, FLS had made a commitment to the NP that they would look at site design and review in terms of how they could improve it and try and reduce some of last year’s problems.
First, they have already invested just under £15.000 to improve the water supply to the existing toilets to provide extra capacity and improve reliability.
Improved signage

They are also looking at improving their signage to try and assist visitors. The draft example shown addressed fires, litter, dogs, noise and overnight parking. On this they have been working closely with the NP and other national agencies and so include the national strapline ‘Scotland-it’s all ours to care for’ to indicate that they are following responsible tourism guidance moving forward.

Proposed changes to existing site
Stuart went on to describe the proposed changes to the existing beach site. The plan is to cut it in half so that one half will accommodate cars. A gate will divide the loop so that the far away section will be a dedicated picnic area. A secondary loop will also be created to enable cars accessing the disabled toilet to have an adjacent disabled parking area. The existing car park area will be scraped to improve it and, to tackle the issue of irresponsible parking, bunds will be strategically placed to prevent parking on the grass. A gate will be installed to protect parking for the bowling club and they will do work on the potholes on the access road to the bridge.

Planning Application
Stuart then referred to their plans to submit a planning application. He commented on the growth in camping at the beach over the years and the fact that, as things stand, they are not empowered to control it. However, if they proactively operate a campsite, they can control the number of campers; where, how, and how long they camp; and importantly they can charge a fee which would allow FLS to employ supervisory staff. Therefore they are proposing to have two sites. The first at the top half of the loop at the beach where there will be picnicking and the second in a field (known as The Nursery Field) between the caravan park and the beach.

On the original beach site alongside the designated picnicking section, there would be camping pitches and a campers’ car park while the second site in the “Nursery field’ would have temporary hard-standing for parking and Portaloos to the right of the access road and the camping pitches would be at the bottom area of the field and would connect to the path for beach access. They plan to have 20 pitches on each site.

Campervans – Stay the night
Due to the high demand for staycations the Scottish government has approved a 3 year temporary change to legislation whereby suitable car parks no longer require planning permission and local authority licensing to accommodate self-contained campervans. Therefore, based on a campervan trial undertaken elsewhere last year, FLS is planning to offer a Stay the Night option to campervans turning up. If there is available space, they then pay and stay the night. Their plan is to have a number of these sites across the NP and Ardentinny is one of them.