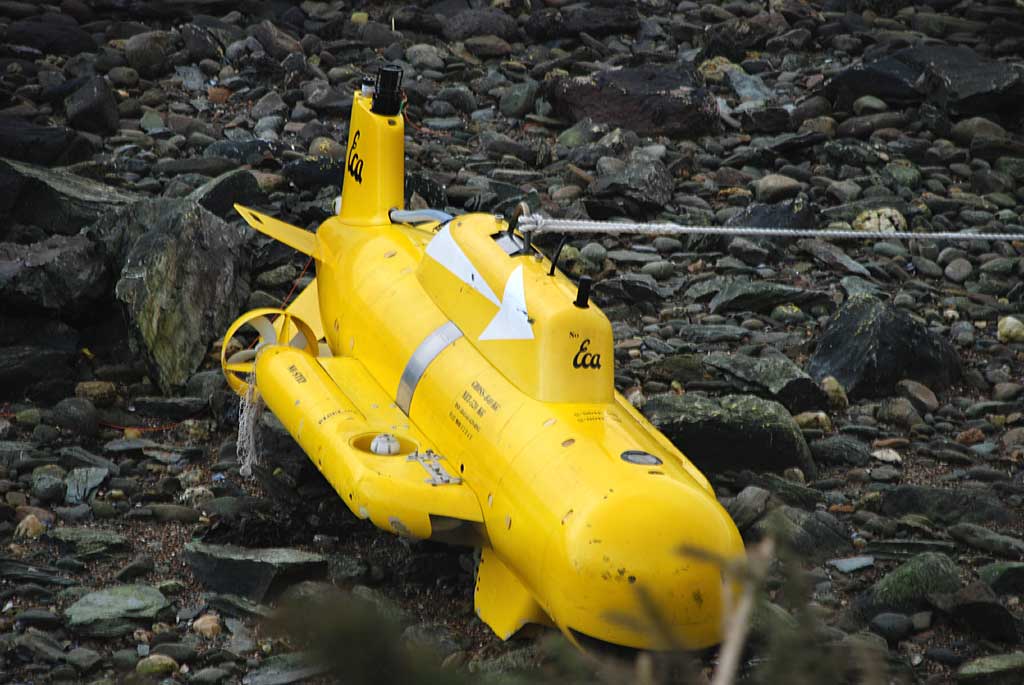 Last Thursday, long-standing Ardentinny resident, Jim Robinson, alerted us of a yellow submarine beached in the Knap area of Ardentinny, and kindly provided a photograph. Apparently Blairmore resident David Rankin had discovered & reported its position both to Jim and the Ministry of Defence. We went along to investigate.

As can be seen from the photographs, it appeared to be a small, investigative craft. We also contacted the MOD for further information and an MOD spokesperson confirmed that the craft came from a minehunter operating in the area, but could not confirm which one. The MOD assured us that the Northern Diving Group was alerted immediately and there was found to be no charge therein and at no time was there any danger to the public. It was also explained that these craft are attached by a fine filament which can be affected by tides or snagging and, therefore, ‘can get lost now and again, but are easily retrieved’. We were told the reason that they are painted yellow is to facilitate retrieval. It was also confirmed that the craft was collected on Monday 11th February.

HMS Shoreham, a Sandown-class minehunter was seen operating in the area at the time of the submarine’s discovery and according to the Royal Navy website is equipped with 2 x PAP 104 Mk5 remote controlled submersibles. According to Wikipedia, the submersibles are used to identify and dispose of mines. They are fitted with short-range sonar, monochrome and colour video cameras and a searchlight.

In 2005, a similar ECA submarine was found by a fisherman floating 3 miles from the Mull of Oa in the Inner Hebrides. The craft spent three months on display in the garden of the fisherman’s brother-in-law, before being collected by HMS Blythe. To mark the occasion, the local Bruichladdich Distillery produced 12,000 bottles of Yellow Submarine whisky and presented a case to HMS Blyth’s captain. The fisherman who found the submarine was reportedly to receive a salvage fee of several thousand pounds (source: Daily Record).

Alas, for both the MOD retrieval crew and the residents of Ardentinny, we do not have a local distillery – yet!

With thanks to Jim Robinson for his contribution to this article. 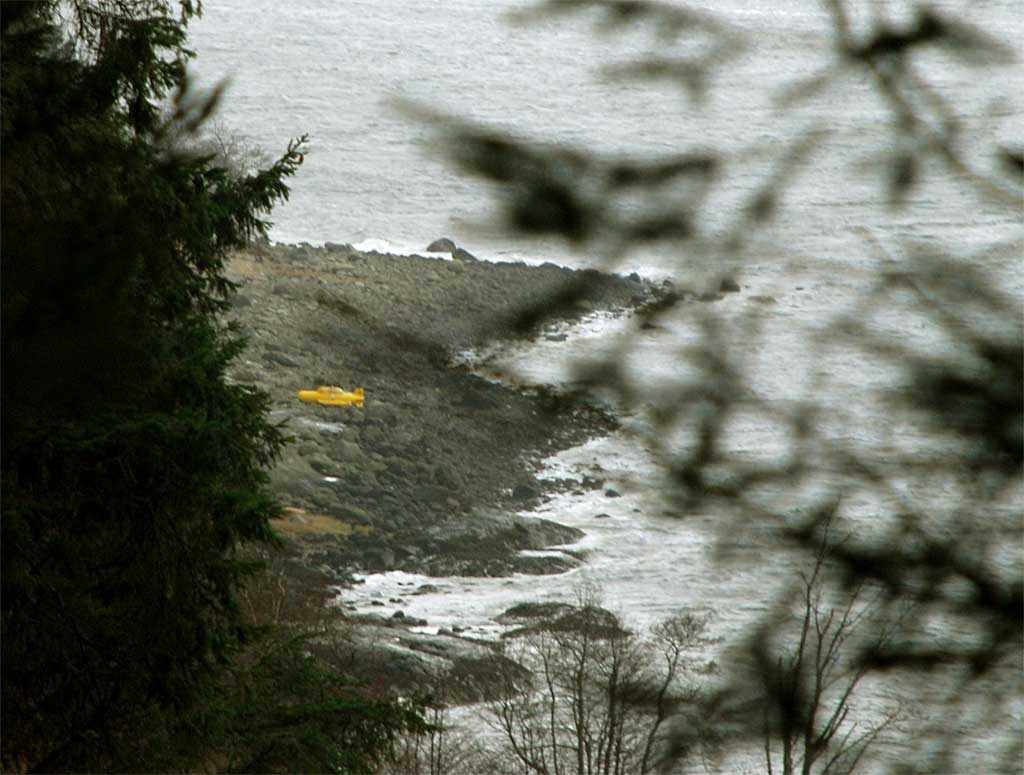 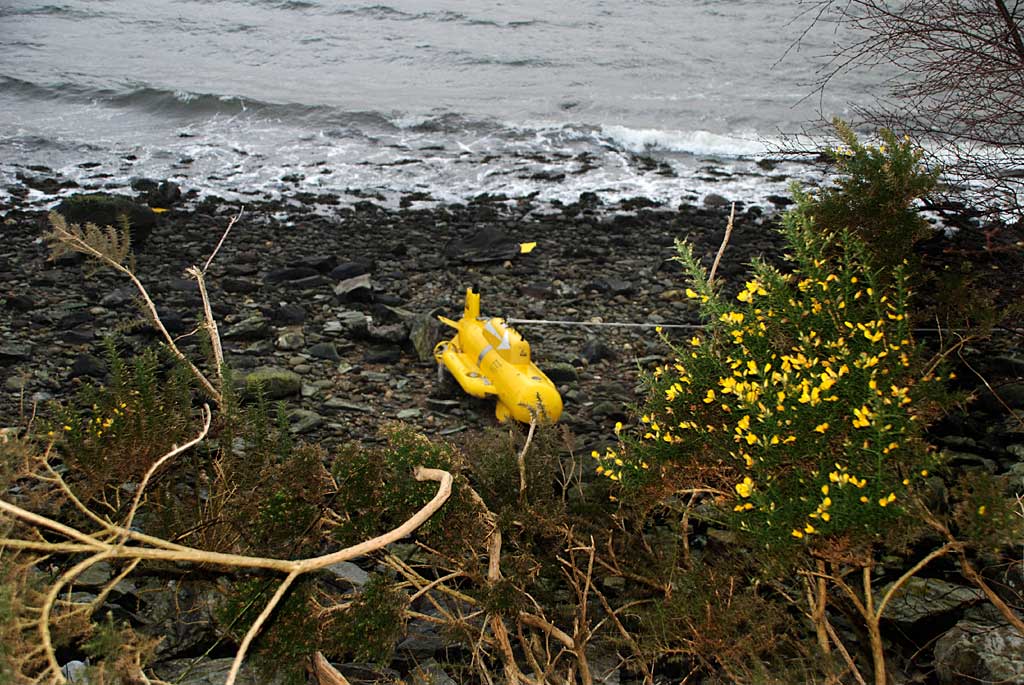 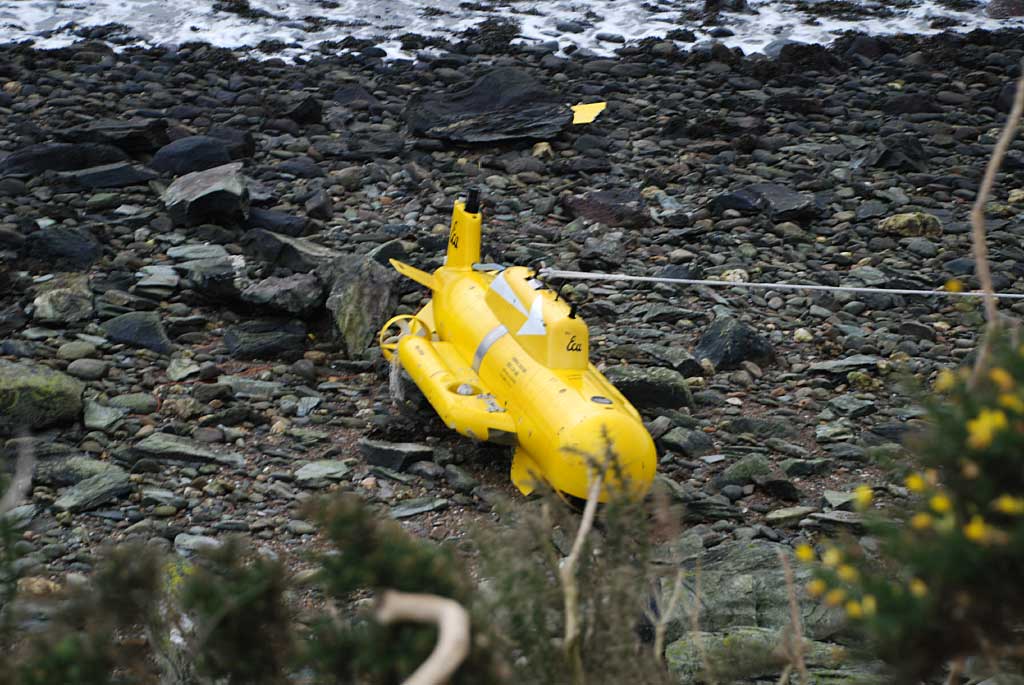 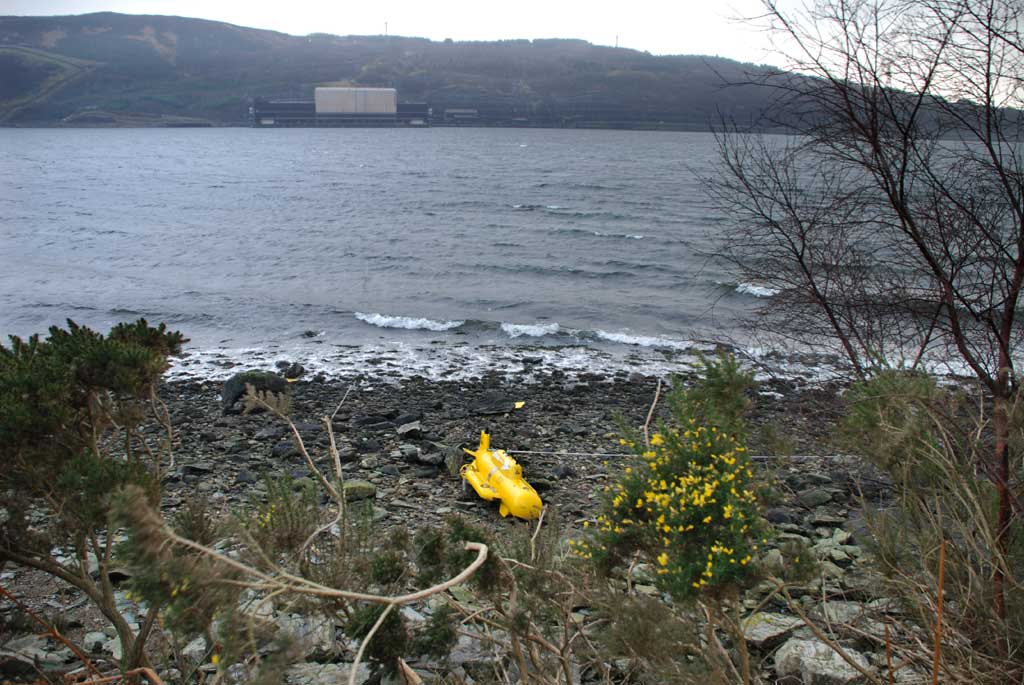 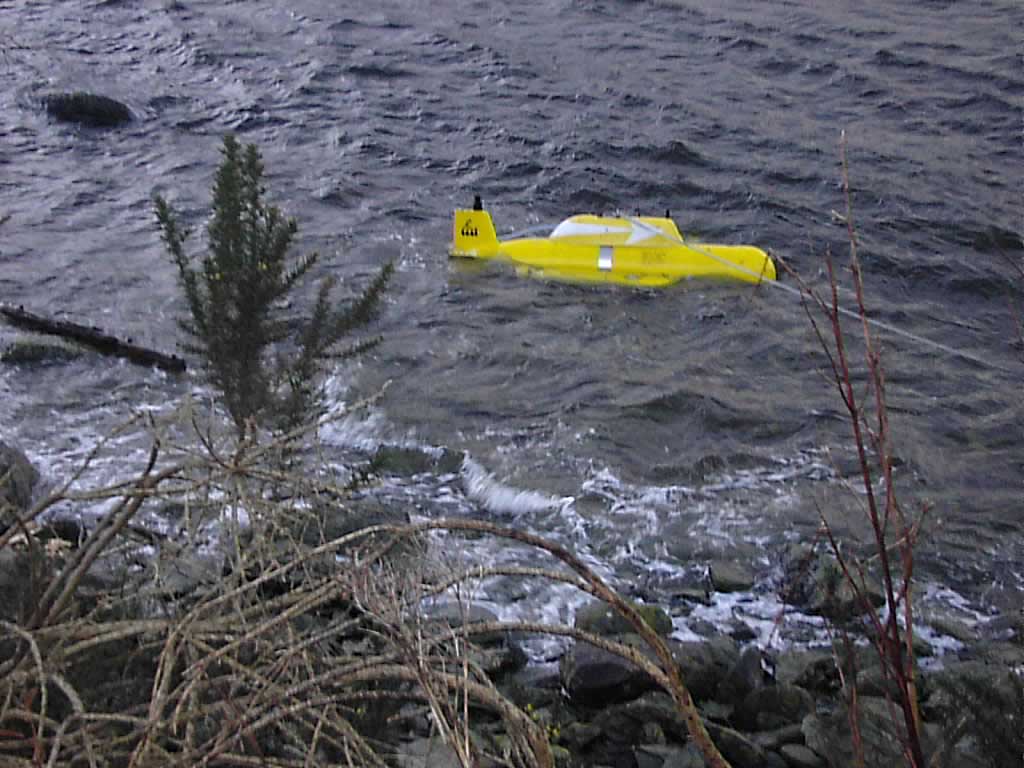 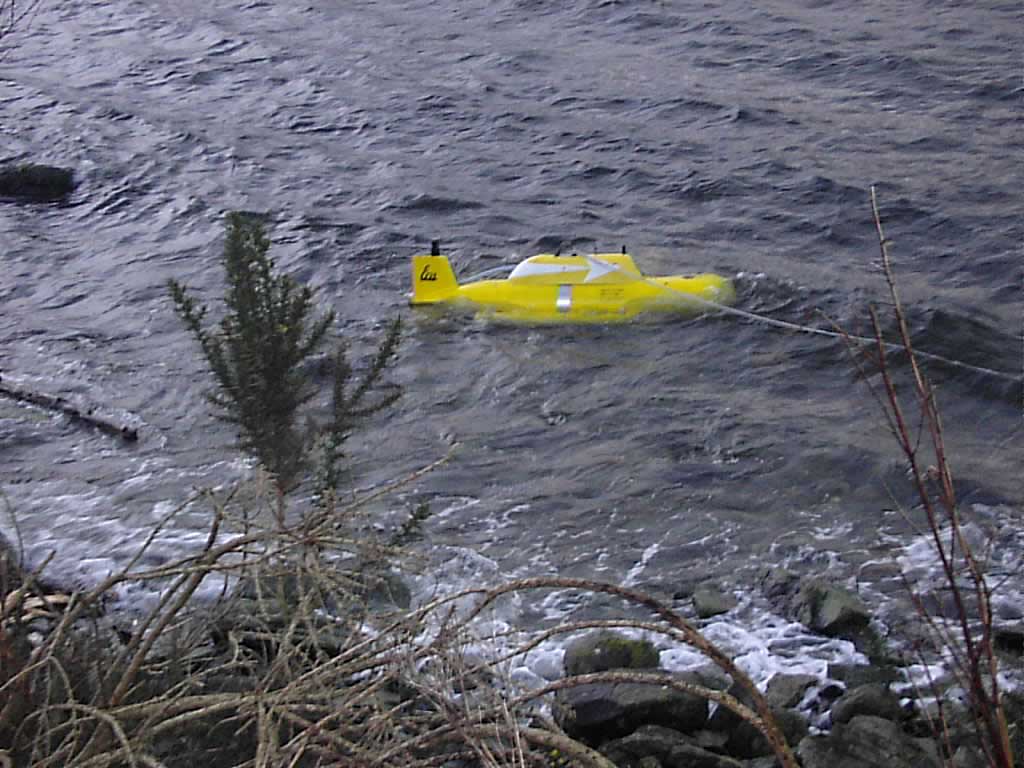 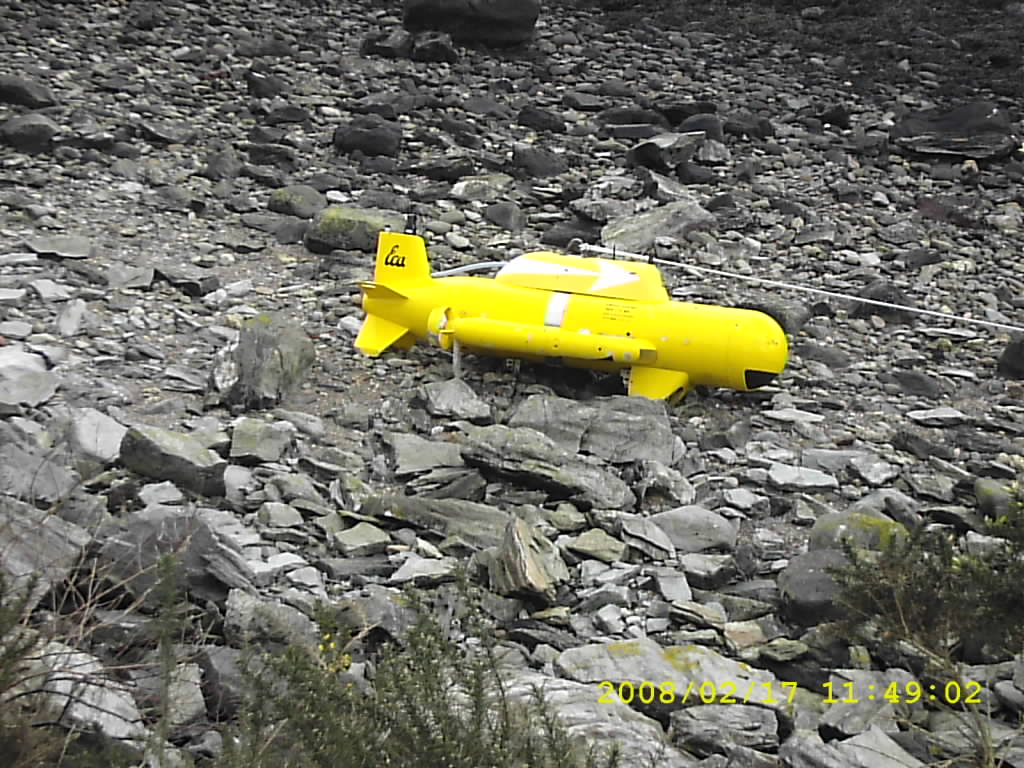 17 February, 2008.
Yellow submarine remains on Ardentinny beach!
Ardentinny’s yellow submarine saga continues with our intrepid correspondent Jim Robinson reporting on Sunday (17 February), that the craft remains beached on the Knap shoreline. Jim was also able to approach unrestricted and photograph the submarine. An MOD spokesperson last week informed us that the submersible had indeed been retrieved. Watch this space for future updates!

18 February, 2008.
Yellow submarine retrieved
An MOD spokesperson today confirmed that the submersible has now been retrieved from Ardentinny and returned to Faslane. He also confirmed that last week the power had been taken out of the craft.