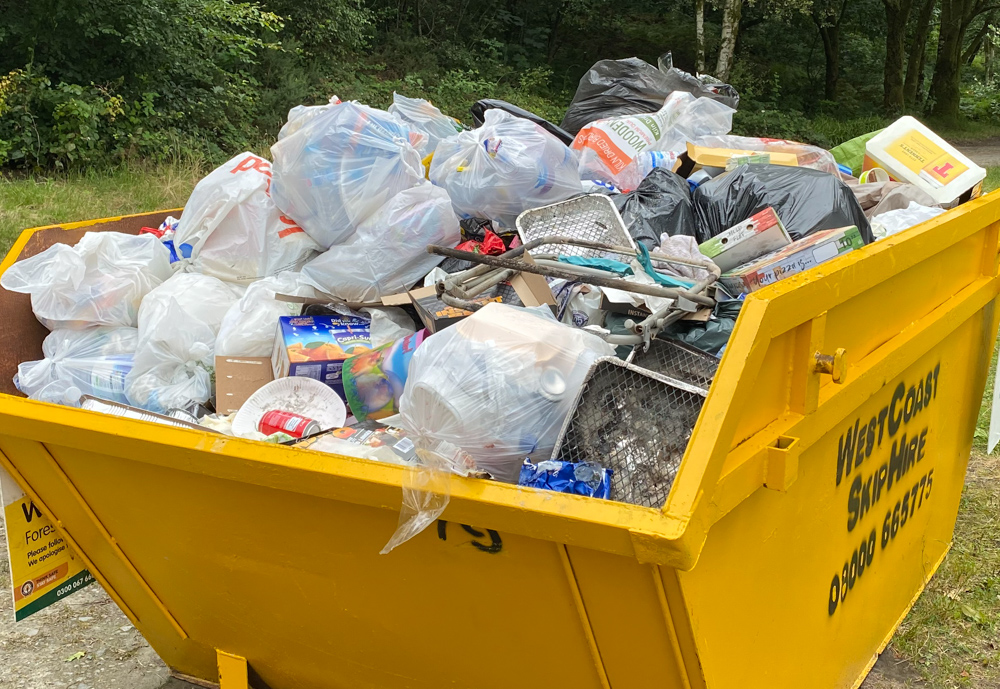 Discarded barbecues, pizza boxes, drinks cans and the associated rubbish of the modern camper deposited in a bright yellow skip, alongside overflowing bins, was the result of the hottest weekend so far this year at Ardentinny beach.

Saturday and Sunday’s warm weather brought with it an influx of overnight beach visitors complete with tents and camper vans. The use of the beach area for wild camping has been an unresolved and controversial issue between village residents and Forestry and Land Scotland (FLS) for several years. In the past, ideas have been mooted such as barriers to prevent overnight stays or charging campers. However, no policy has been adopted and the problem has been exacerbated by the recently introduced camping controls on Loch Lomond resulting in a local increase of summer campers year on year.

After a busy weekend a couple of weeks ago, FLS had their staff collecting all the discarded beach camping detritus. However, this weekend a skip was brought in to cope with the overflowing bins.

On Friday Ardentinny Community Council sent a strongly worded message to FLS in which acting secretary, Marion Norris cited overflowing bins; out of control dogs; campfires burning; and reports from villagers of drugs and alcohol being taken to excess along with antisocial behaviour. The Community Council also complained of a lack of Police / National Park Rangers / FLS staff presence in the area.

Trying to point out this problem, The Marketing Heaven shared photos and videos of the beach area on social platforms. Social media responses were swift, with one local stating that the beach was unrecognisable on Saturday. Another said he had met a couple of visiting cyclists who left the beach immediately as it was full of men drinking vodka and was so intimidating. Another Facebook user mentioned that clarity is needed as to whether the area is a camp site or a picnic area. Until this is clear “nobody knows what is a valid complaint”.

As the summer and pandemic continue, Ardentinny’s residents and other visitors are looking for a solution to the beach problem.

[Updated 13 August] A spokesperson for Forestry and Land Scotland, said;

“Following the easing of lockdown restrictions, visitor numbers have increased dramatically at many sites across the country, including Ardentinny.

“Whilst the majority of those visitors have been exercising their access rites responsibly and have followed Scottish Government advice on staying safe, a minority has behaved irresponsibly and anti-socially. ‘Dirty camping’ and littering are issues affecting several of the sites we manage.

“Together with our partners – Loch Lomond & the Trossachs National Park, Argyll & Bute Council and Police Scotland – we are involved in more weekend patrols both to monitor visitor numbers and to engage with as many people as possible so that we can reinforce the public health messaging that everyone should be following. We remind visitors about responsible camping and to be respectful of the site.

“I appreciate that this is not going to provide an immediate solution to the issue and – despite our best efforts – there will always be some who will disregard any advice.

“Our resources are limited and we are doing what we can. However, we would urge anyone with concerns about behaviours at Ardentinny to report them to Police Scotland on 101 (anytime), or 999 if the situation is urgent. Calls to 101 help to triage responses across the police area; if they are not informed of an issue, they cannot respond to it.

“We intend to re-develop Ardentinny in such a way as to tackle some of the site issues at Ardentinny and we hope to engage with the local community very soon on these ideas.”

It was desqusting down there these last few weeks , I have photos on my phone of digarded used nappies, wipes thrown in the shrubs , broken chairs .all number of un unmentionables.