Jann Garratt of #AfftheClyde action group compiled, circulated and has now analysed the local questionnaire eliciting residents’ views on the Dawnfresh trout farm proposal for Ardentinny which are summarised as follows:

AFF the Clyde was formed by a group of volunteers, resident in the village of Ardentinny. The group formed to oppose the development of the Industrial Fish Farm proposed by Dawnfresh, the largest producer of trout in the UK.

AFF the Clyde undertook to survey the views of Ardentinny residents regarding the proposed Industrial Fish Farm Developments using a questionnaire devised for this purpose. A total of 130 questionnaires were distributed within the village and 71 were returned. 55% of questionnaires were returned, however it is not possible to calculate an accurate response rate as there are an unknown number of unoccupied second homes and holiday rentals both within the village and caravan park. 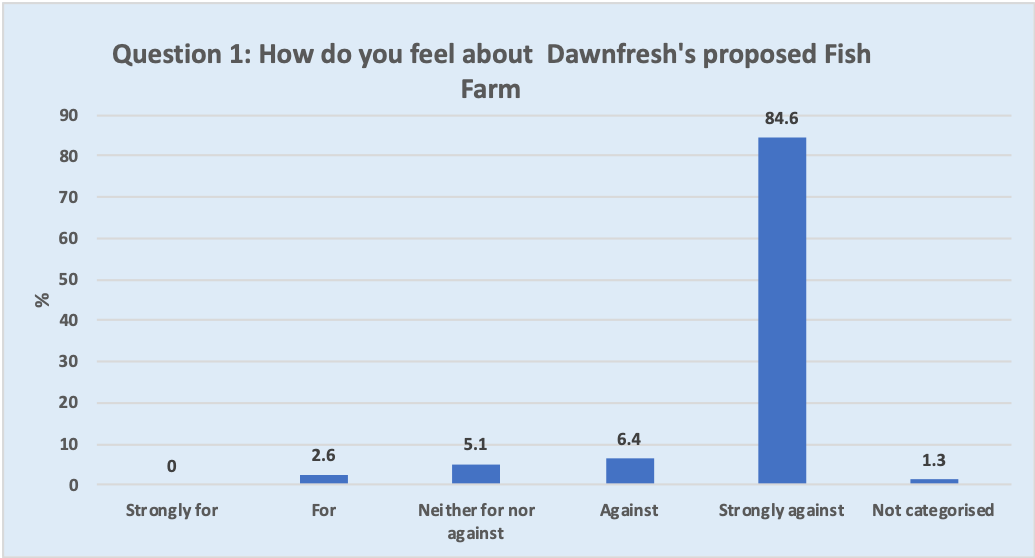 Although AFF the Clyde is a campaigning group with a clear remit to oppose the Dawnfresh development proposals, any views expressed in favour of Dawnfresh’s Fish Farm in this survey has been reported in full. The raw data gathered in this survey is available upon request.

The questionnaire looked at whether people were against or in favour of the development. It also looked at the strength of concern around environmental issues connected to the Fish Farm, together with the impact of the Fish Farm on wildlife resident in the loch and the impact upon Ardentinny and its surrounds. Respondents were also invited to identify any other issues of concern to them.

In the final question, respondents were invited to identify any issues of especial concern to them, and many different issues were raised. The most frequently occurring issues of concern to respondents were the range of different impacts upon the quiet and beautiful village of Ardentinny, the impact on mammals and other sea life in the loch with especial reference to the small seal colony resident near to the proposed development site. Concerns about the effects of chemicals added to the sea pens during the farming process and the potential of those pollutants to negatively impact on the health of those using the loch for recreation were also frequently expressed, as were a range of concerns about the company of Dawnfresh as the company developing and operating the Fish Farm.

It is very clear from the questionnaire and the resulting analysis of the data that the overwhelming majority of Ardentinny residents who responded to the survey were strongly against the proposals by Dawnfresh to site an Industrial Fish Farm on the shores of Loch Long next to the Ardentinny village. The view which has clearly emerged is that this development is unwanted, uninvited, unwelcome and should proceed no further. It is intended that this report is to be fed into the planning process. It is hoped that serious weight is given to the depth of feeling against the proposed Fish Farm development by the Ardentinny community.

Hugely indebted to Jann for pulling this all together so effectively, a tremendous job and to Ann and Lynn who did a lot of leg work and last but not least all those who took the time to contribute their views to this important discussion. Thank you!