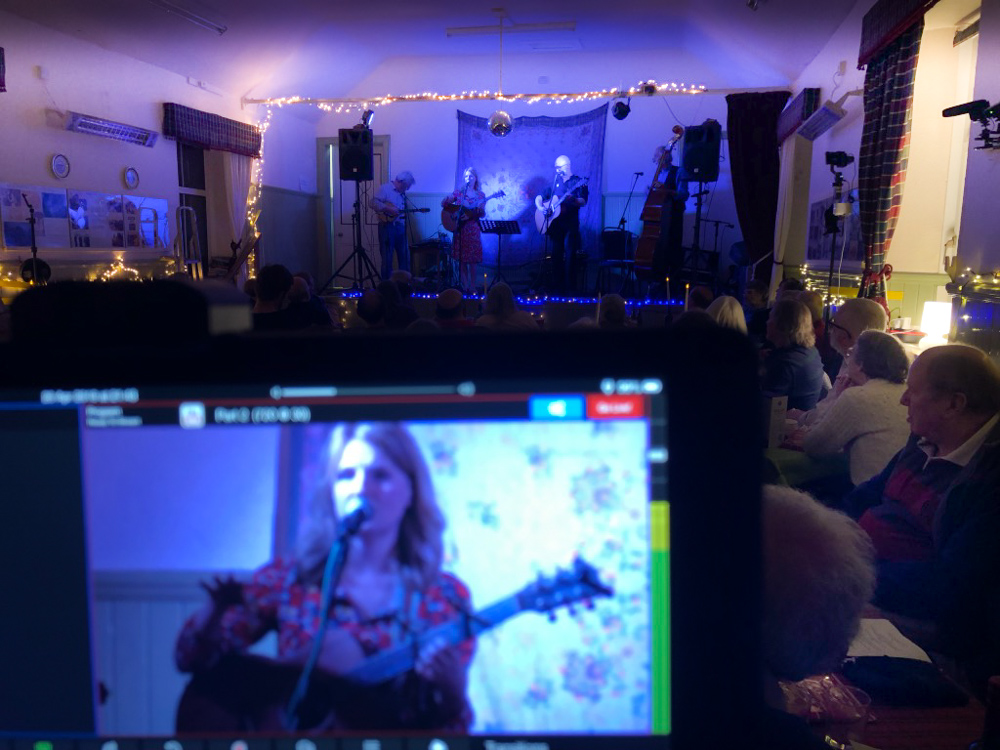 Oh what a night. Late April twenty nineteen. What a very special evening. As I remember, what a night!
Think of great music; dedicated, accomplished performances; warmth and camaraderie both sides of the stage mixed in with a touch of cafe theatre with family and friends and you have last Saturday night in Ardentinny Hall.  But what made it so good? The programme was as eclectic as each component part was individual and the standard of the performances was testimony not only to the talent of the performers but to their outstanding dedication to their craft.
Talented fiddler Iain Davidson opened the programme with a couple of Scottish marches, then a slow air from Shetland and finally a foot-tapping two-step.
Next up with a change in style and tempo, Ambrose Harper, Allan Guerrish, and Bill Tierney gave us Lindisfarne’s ‘Meet me on the Corner’ followed by Richard Thompson’s ‘Waltzing for Dreamers’ and finished with Buddy Mundock’s ‘Comin Down in the Rain’ with the trio’s instrumental skills and harmonies charming us in equal measure.
Las Jubiladas (Linda Petty, Jane Mitchell and Julie Forrester) followed with a master class in recorders, the likes of which many of us had never seen, if heard, before. Their set, incorporating different musical styles – jazz, folk, boogie – and types of recorder, was as instructional as it was enjoyable.
Step change as Ceol Breagha (Ian Darroch, Aileen Morrison and Jim King) offered up a feast of Celtic music with a selection of Irish, Scottish and Breton marches, Strathspeys, Jigs, Reels and Hornpipes.
After a buzzing interval of chat, food, drink and raffle draw Ukes not Nukes (Mike Loochin and Susie Robertson) gave their first and most impressive ukulele performance supported by Clair Tierney and Derek Nelson. First with Dolly Parton’s ‘Jolene’ followed by George Ezra’s ‘Budapest’.
The final set of the night was Ardentinny’s own singer songwriter, Clair Tierney supported by her Dad, Bill Tierney, Derek Nelson, Allan Guerrish and Ambrose Harper. It was a wonderful mix of country numbers interspersed with Clair’s own compositions from her Cowal Song Cycle and showcased the depth of her talent along with that of her accompanying musicians.
The whole event was ably strung together by our equally entertaining compere Alison Duncan who also performed her self-penned ballad Baron MacInturner and an Ian Ingram song dedicated to former Ardentinny outdoor centre instructor, the late Hilary Smith. For local and visitor alike, the evening held an enduring sense of place and culminated in a finale with audience and performers singing Harry Lauder’s O’er The Hill to Ardentinny.
11 performers and 12 distinct instrument types later, it’s little wonder Clair Tierney said ‘Transatlantic Sessions eat your heart out!’. With that in mind and an increasing appetite for more, have we just experienced the birth of an annual ‘Tinnyfest’? Let’s hope so!
O’er the Hill was live streamed by Ardentinny.org with audiences as far apart as South Uist and New Zealand. Recording is below.