At Ardentinny Community Council’s meeting of 1 April, agenda item 12 addressed the current position regarding the Dawnfresh Trout Farm proposals for Ardentinny and the Firth of Clyde. Convenor, Neil Robinson, stressed that the well attended public meeting on 11 March was not the official consultation but a pre-consultation meeting to gauge local feeling and answer questions. The Community Council will inform residents of dates for the official consultation in due course.

Dawnfresh Environmental Manager, Peter MacDougall has extended an invitation to anyone interested in visiting one of their fish farms to do so either via Ardentinny Community Council or direct. Also, results of their EIA Screening application to Loch Lomond and the Trossachs National Park will be communicated to the local community when they become available. A resident suggested that Dawnfresh representatives had been a bit disingenuous at the public meeting when describing their activities on their other farms and that there have been a number of problems on Loch Etive, for example.

Neil Robinson went on to read a copy email from Lynn Kerr to community councils in and around the Clyde Estuary warning them of the potentially negative effects of the proposed fish farms off Cumbrae and Bute on all the wildlife in and around their shores. She invited them to collaborate, consult and share information ‘to present a united front against this threat to our wildlife and tourist economy’ and to provide a contact email so that  everyone can be kept informed of developments.

As an extension to this, Marian Norris said that she would raise the issue at the next caucus of 11 community councils with the possibility of extending it to even more.

An email from Elaine Allan was then read inviting others who are against the proposed fish farms to come forward and form a working party with the aim of opposing the Dawnfresh proposals, which she also indicates in the poster (below). 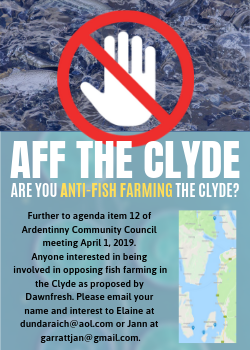