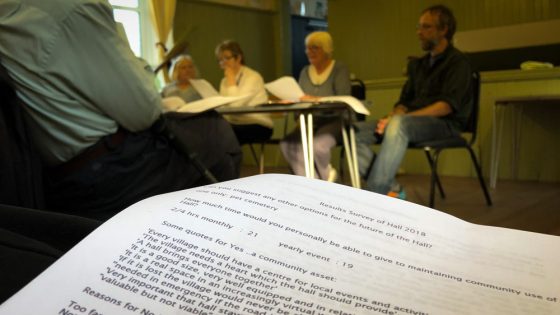 At the Village Hall AGM in Ardentinny last week, one thing became abundantly clear. Namely, that the intervention at the EGM the previous August by Agnes Harvey, Guy Elder and Merle Ferguson who volunteered to stall the then imminent disposal of the Hall by caretaking it over the winter, had paid off. During that time the hall was ‘reopened for business’, allowing local clubs to return to use it and organisations and individuals to rent it for meetings and events. Minor and more serious defects in the fabric of the building were identified, the former being dealt with by Guy while quotes were obtained for rectifying the latter. Agnes, as Treasurer, dealt with documentation, the bank account and necessary payments while Merle, as secretary, handled hall bookings and correspondence and undertook a survey of residents as to the future of the hall.

Out of a total of 105 respondents to the survey 94 considered the hall to be a valuable community asset. 67 wanted it maintained as it is. Others voiced a variety of alternative uses: replacing it with a sustainable, custom-built hall on land beside the village car park with perhaps some social housing units to attract young families or even refugees, as in Sutera; to be maintained as a heritage site, e.g., museum/arts/information centre; to be used as a hostel; to be used as a pet cemetery; to be let to an approved business. With a considerable majority voting to maintain it as is, the meeting progressed in that vein.

While the annual accounts are not yet complete, Agnes reported that current hall funds stood at £16,282.37 with all bills paid to date. Mrs. J Urquhart, Accountant, has volunteered to audit the accounts, when completed.

Guest speaker, Anne Sobey, Development Manager, Community Partnership, Loch Lomond and the Trossachs National Park, informed the meeting about the forthcoming village hall summit, being held on the 27 June. She explained that, in response to a survey of all the Park’s Village Halls, they decided to organise this summit in the following way: Halls have been circulated with a pre-meeting checklist in order to establish their precise needs and which they are requested to complete and bring with them. On the day, rather than have a standard workshop, they have invited a group of experts to attend. These range from architects, professional agencies, business representatives, all with specific skills and with whom hall representatives can consult in this pop-up skills marketplace with the ultimate aim of going back to their communities with a sustainable plan for their hall’s future. A representative from Ardentinny is invited to attend and there will be Community Partnership follow-up thereafter.

Guy Elder then outlined problems with the fabric of the hall. There is a considerable problem of water ingress due to blocked drainage systems which require groundworks to clear and probably replace old clay pipes and provide an effective new drainage system. The septic tank also needs to be investigated and probably replaced to bring it up to current Health and Safety standards. Dry rot has been identified in the rafters which needs to be remedied and new damp coursing is also required. Finally, there is an urgent need for re-wiring and an upgrade of fuse boxes. The total cost is estimated at £4,200 and a show of hands was requested in support of using some of the hall’s capital in this way. The 50-strong audience gave a unanimous yes.

The meeting was then opened up for questions and discussion. It was suggested that the four community entities, i.e., The Hall Trust, The Community Council, Ardentinny Community Trust and Ardentinny Renewables Trust meet together to agree a season or year plan of collaborative fund-raising village events.

There was a complaint about lack of communication and inclusion which led to some voicing their preference to return to paid membership. There was a vote 21/13 in favour of the latter. However, it was pointed out that this was not representative of all residents who are currently and automatically non-paying members. It was also suggested that a more inclusive, non fee-paying membership may be more favourable when applying for grant-funding. It was suggested and agreed to ask this question at the Village Hall Summit and also to survey all the residents before taking a decision. Neil Robinson volunteered to write and circulate a regular newsletter to improve communication.

The current committee stood down and were proposed and seconded to return for another year. In addition another 4 came forward to join the committee which now comprises Agnes Harvey, Merle Ferguson, Guy Elder, Linda Naismith, David Edwards, Clair Tierney and Ken Walker.