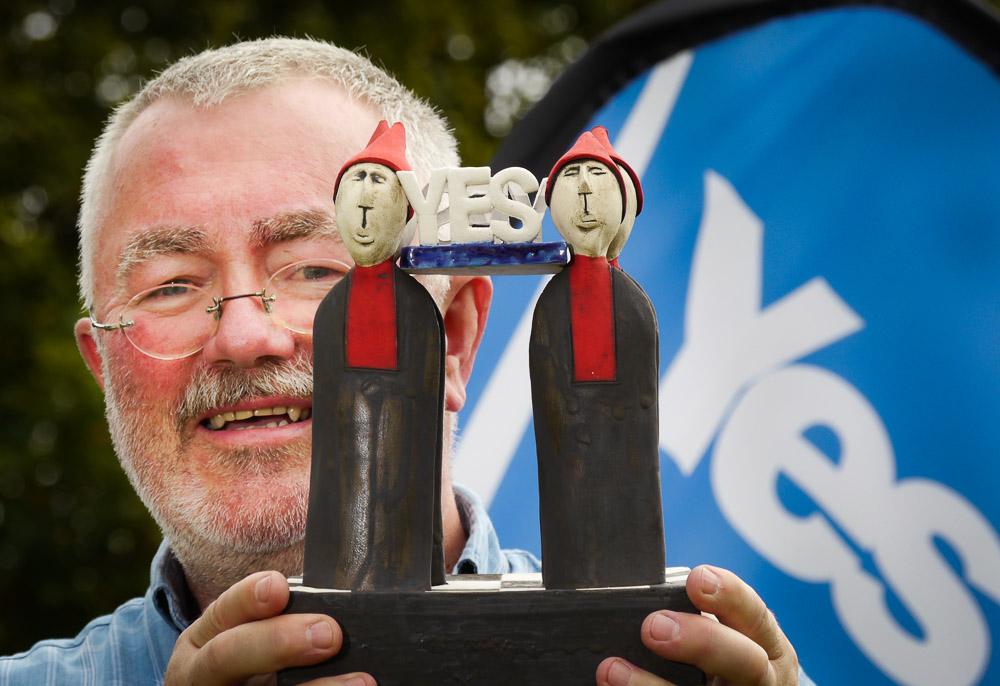 Accomplished ceramicist, community councillor and care worker, Bill Williamson wears many hats. A lifelong campaigner for the rights of others, Bill considers the Westminster system is broken. “Working three days a week as a carer, I have seen first hand the effects of the cuts that are being experienced by vulnerable and disadvantaged groups in Scotland.

With the UK government’s recent austerity measures, the Scottish Government has had to judicially juggle its overall budget in order to protect its spending on health. However, with more austerity measures promised by Westminster there is only so much Scotland can do and we need full control of Scotland’s finances if we are to properly care for our sick and disadvantaged”.

Bill has created a ceramic sculpture to commemorate the September 18 Referendum. “This Thursday we have a once in a lifetime opportunity to make things better for Scotland and its people. The Westminster politicians and the mainstream media have done their best to scaremonger and polarise the nation. They would have us believe that the vote is for an individual or a political party, this of course is nonsense.

For the first time in 300 years, we have the opportunity to take control of our own destiny and in 2 years’ time elect a government of our choice. I have no doubt we will have teething problems, however I feel sure that the grassroots groups this referendum has created will ensure our future politicians are kept firmly in line.

My referendum piece represents the four countries of the current UK. Independence will not just be a victory for Scotland, it will represent an opportunity for England, Wales and Northern Ireland to break away from the Westminster system”.

Bill Williamson with be participating in the Cowal Open Studios event from 26 – 29 September, 2014. More details here.