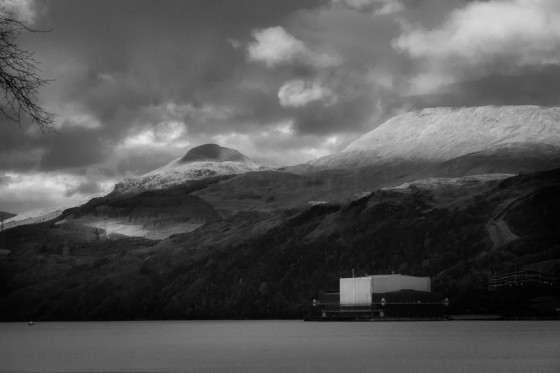 At a lively Community Council meeting on Tuesday, Ardentinny residents demanded that MoD representatives attend a public meeting in the village within the next four weeks. The demands come after a week of violent explosions which emanated from nearby RNAD Coulport. Whilst the MoD later apologised to the community, villagers are unhappy with the lack of advance warning or explanation for detonating such large explosions within the nuclear base. Late last week a national newspaper reported that an MoD spokesperson described the blasts as “part of training for staff at RNAD Coulport”.

At Tuesday’s meeting, Convener Val Kennedy referred to previous Community Council discussions regarding the lack of radiation surveys undertaken recently in the waters around Ardentinny. She quoted a statement received from RNAD Coulport “Marine environmental radiation surveys are carried out around all submarine bases and the reports are put together by the Defence Scientific and Technical Laboratories and are published. The SEPA website gives more data on their inspections of Coulport amongst others”.

Community Councillor Bill Williamson asked the Convener how she had received this information and was told that it was the content of an MoD email. Councillor Williamson responded that he was not aware of this information being circulated to Community Council members and requested that he receive a copy. The Councillor went on to summarise a report in a recent Herald article on a plan to discharge more radioactive waste into the Clyde.

“As someone living across from Coulport, I think this is a major topic for discussion in this community. On top of this we have these ridiculous explosions which we have all experienced during the week”. The Councillor added that, at his request, the Community Council had requested an MoD representative to attend Tuesday’s meeting. The Convener responded that the reply received from RNAD Coulport was that the notice given was too short.

Convener Kennedy said that Councillor Williamson’s request to have an MoD representative at meetings was not based on a precedent, as he had asserted. However, representatives from the Property Services Agency did attend a series of “community information and reassurance” meetings on behalf of the MoD in February 1989 during the construction of the base at Coulport. Councillor Williamson said that he still considered that there was a precedent for the MoD attending meetings and that they should be doing so on a regular basis.

Councillor Dennis Gower also drew attention to the recently reported radiation leak at the nuclear submarine test reactor at Dounreay which has taken two years to be revealed by the MoD. “With this type of concern, we should be increasing our concerns about activities at Coulport”. He continued, “There have been reports of accidents at Coulport and we do not appear to have responded to these”. The Convener replied that the Community Council had responded by email regarding the recent ‘bangs’, the lack of advance warning of ‘the exercises’ and radiation surveys.

Councillor Williamson reiterated his request to the chair that all Community Councillors should be copied in to all correspondence with the MoD. He continued that he had sent an invitation to the MoD some 18 months ago to attend a Community Council meeting. The Convener responded that Coulport had taken exception to the tone of his letter and that she had retrieved the situation and would now be the communicator or ‘conduit’ (with Coulport), Councillor Gower said that the matter of Coulport taking exception to a letter from another Councillor was of little importance compared to the leakage of radioactive waste.

Later in the meeting Councillor Williamson repeated his request that he be included in all email communication with the MoD. The Convener replied that she would pass on any emails that Coulport permitted. Some indignation at this was expressed from the floor. Argyll Councillor Gordon Blair interjected “It’s sensible to have one person deal with the MoD, and to disseminate the information you get from the MoD. I can assure you that the MoD will not send you anything that cannot be shared”.

On the severity of the recent blasts a resident said that these were not bangs, but explosions. The Convener responded that “the information she had been given (by the MoD) was that it was a training exercise and they had failed to inform us, but they did apologise and promised to inform us in the future.

Another long-time Ardentinny resident said that during the construction of Coulport, the authorities used to put a notice up in the village warning residents of any blasts taking place and advising them not to swim or eat the shellfish. The resident continued “We get nothing now. We used to have a building on the edge of the beach which recorded sound, it’s no longer there”.

“As a Community Council representing our community, we would like you to ask questions of the MoD. It’s about time we had answers from them. They have been bad neighbours, we’re only asking for them to consider the facts. Sweeping it under the carpet is not going to make it go away”

Argyll & Bute Councillors Blair and Marshall offered to write to RNAD Coulport to request a public meeting with MoD representatives, however the Convener was emphatic that she would issue the invitation. Councillor Marshall also said he had already written to the Ministry of Defence asking that this does not happen again.