Continuing on from our previous article on Glenfinart House when it was used as a holiday centre between the 1930’s and early 60’s. Elizabeth Brooking, granddaughter of  the late Henry C. White, owner of Friendship Holidays Association, has provided us with  more images and information from her archive. In addition to Glenfinart House, Henry C. White owned a chain of holiday centres throughout the UK as well as offering holidays in France, Switzerland and Italy.

The house finally closed as a holiday centre in 1961, on the death of Henry C.White and the majority of the building was destroyed by fire in 1968. All that remains today is the main turret.

Through the previous posts on Glenfinart House at Ardentinny.org, Elizabeth (whose parents met at Glenfinart House) has also found a long-lost relative who shares the same great grandfather as her. This has resulted in dozens of unknown relatives being traced. She’s looking forward to meeting at least some of them in the future!

With the help of Ardentinny.org Elizabeth has also been in contact with others researching the history of the Friendship Holidays Association and the hope is that the FHA material which has been collected will be archived for future generations, to provide a history on the organisation and the people involved.

As a footnote In 1966, Elizabeth Brooking’s mother wrote a story for a competition based on the Ardentinny fire. It can be read here. 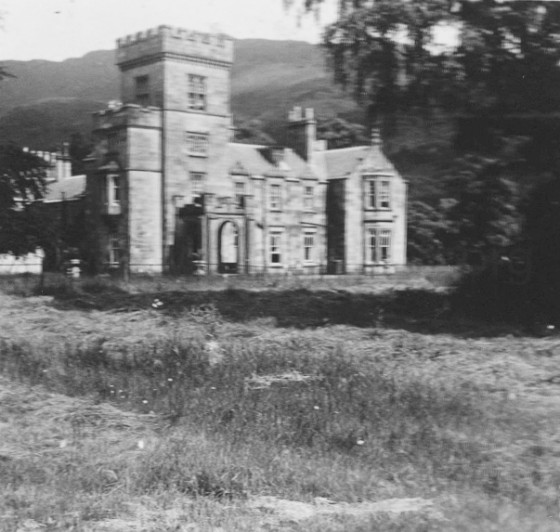 I have found the articles on Euphemia McKellar and also on Glenfinart House very interesting. Although there does not seem to be any family connection that I know of, My 3rd Gt Grandfather was Peter McKellar, born about 1771, he married Margaret Campbell 7 Dec 1797.

The marriage is recorded as McEllar in the Dunoon and Kilmun Parish records. From Margaret’s death certificate 21st Feb 1855, her parents were Duncan Campbell and Nancy McNaughtan. I have been unable to identify these from the records. Margaret was buried at Lochgoilhead, which might indicate a connection to either McKellars or Campbells there.

Catherine married Duncan Thompson who was a shoemaker in Ardentinny. In the 1851 census they were living at “Coral cottage”. This does not seem to exist now but in the census, Rose Cottage was the next record.

My Gt Gt Grandmother Helen McKellar married 31st Oct 1837, Alexander Grierson, a mason who was living at Barnacabber in the 1841 census. No doubt he would have been employed in the restoration that was taking place at Glenfinart House at that time.

In the 1851 census, Alexander gives his age as 88 and his birthplace as Wigton, Dumfries. Barnacabber is recorded as the home farm for Glenfinart Estate.

Peter and Margaret McKellar in the 1841 census are at Coul, and on her death certificate it states that she died at Coul farm Glenfinart and has lived there all her life. Peter was deceased in 1855 at Margaret’s death and had been a shepherd.

I have also been in touch with the late Alistair Mclean. I was trying to establish where Coul Farm might be. His family had lived in a house “Coul Cottage” at Barnacabber. This house is not marked on the attached 1865 map, but it is still present on Google earth at Barnacabber. When I showed Alistair this map he told me that when he was a boy he had played in the ruins of an old building where “Cuil ” is marked on the map.

I am convinced that this must be the Coul that is named in the census and Margaret’s death certificate. Peter was a shepherd and there is a sheep fold marked nearby.

Perhaps someone might be good enough to let me know the present spelling for the Cuil Burn which crosses the road near Barnacabber. I am sure that Cuil and Coul must be phonetically the same.

Alexander Grierson and Helen McKellar had two daughters, the eldest Helen, my Gt Grandmother, and Sophia. Both came to Australia, Helen aboard the “Glen Isla” in 1857, where she married John Taylor who had travelled on the same ship. Sophia emmigrated in 1867.

If anyone has any information concerning this family I would love to hear from them.