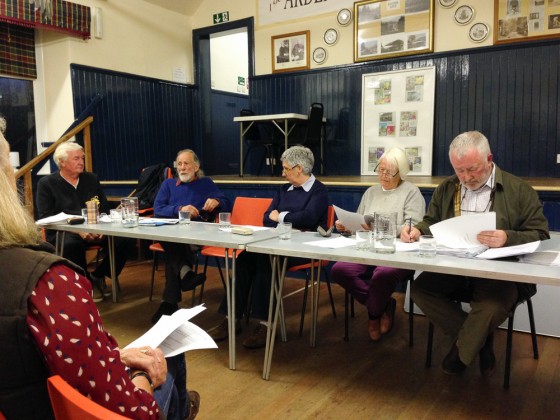 At the Ardentinny Community Trust Annual General Meeting earlier this week, the outgoing trustees outlined the Trust’s achievements over the previous 12 months. In this the first full year since Glenfinart Walled Garden had been acquired for the community, Convenor Bill Williamson highlighted the following:

– A timber cabin was purchased and erected. This facility is used for meetings and welcoming visitors to the garden. Two storage sheds were also added as well as a polytunnel.
– A vegetable production garden was created with produce being sold at Blairmore Farmer’s Markets.
– Emma and Sophie Thompson became patrons of the garden.
– With the help of Forestry Commission Scotland, community volunteers and National Park volunteers, part of the garden was cleared and an orchard planted.
– An experiential and educational Children’s Garden has been created.
– The garden received many visitors over the year including representatives from The Royal Horticultural Society.
– John Hancox, Chair of Scottish Orchards, advised and participated in the establishment of the orchard at the garden and has developed an excellent partnership with Strone Primary School, which is ongoing.
– In May, Beechgrove Garden representatives gave a presentation to the community, prior to the Walled Garden Project being chosen as their Community Garden. It was the first time in Beechgrove Garden’s 35 year history that the programme was transmitted nationwide. The Trust also received the services of a garden designer and funding towards plants. None of this would have been possible without the support of local businesses and volunteers.
– The Trust has been represented at several Cowal community events over the year including “Little Acorns” at Hunters Quay. Directors also visited other community gardens.
– Funded by Voluntary Action Service  (until December, 2013), the Trust has acquired the services of a professional gardener/volunteer coordinator.
– A monthly newsletter is now distributed to all households in Ardentinny.

The garden has had the services of the H.E.L.P., one day a week throughout the summer. This assistance will resume in the Spring. The Community Service Payback Team has also helped throughout the year.

In the Treasurer’s Report, Dennis Gower reported that the Trust accounts were healthy in March, 2013, however there had been heavy expenditure since then. Trust subscriptions are used solely for Trust business and not garden-related expenditure. Grants had been received from LEADER, which requires 50% match-funding as well as Highlands and Islands Enterprise, Argyll and Bute Council and Forestry Commission Scotland.

The Trust now has a full complement of Directors with three new Trustees being elected. They are Lynn Kerr, Linda Naismith and Ian Kerr who join the previous Trustees Bill Williamson, Merle Ferguson, Dennis Gower, Anna Williamson and Jimmy Gordon.

In response to a question from the floor, Bill, Dennis and Anna outlined future plans for the garden including funding for the restoration of the wall; future fundraising events and the development of the children’s area. The Trust is very encouraged by the promises of future support received from schools, nurseries and the Outdoor Centre.

Merle Ferguson explained the criteria that has to be met related to the Voluntary Action Service funding of the gardener post as well as the Trust’s desire to encompass all the Cowal community from the very young to the mature resident as well as the disadvantaged. She also outlined that other than  “digging the garden” there is a wide range of activities that volunteers can get involved in, such as garden guides and fundraising.

The committee thanked all those who had generously donated their professional services, equipment, and time.

As Anna Williamson said “What an amazing garden the community now have. Just one year on and what a positive effect it has had on all. Visitors come from far and wide and there has not been one unenthusiastic comment in our visitors’ book. Instead, they are uplifting expressions of encouragement, admiration and enthusiasm.”