While we were there, we offered people free apples and postcards with apples on them. A lot of people took the apples but not so much the postcards. A while after, the three of us got our photos taken by a photographer. Then Sarah was covered in apples for a national newspaper article.

At about 12:45pm we went into the Parliament Building to display our apples and apple flapjacks, which we had made using the apples that we picked from the Glenfinart Walled Garden. The apples and flapjacks were amazing and the display was fabulous looking with all the apples in the baskets. Strone Primary got a Wee Apples Award for coming along and helping out at the Glenfinart Walled Garden, working in partnership with the garden and their team of volunteers.

After the awards we went and had some lunch then we went on a tour around the Parliament Building. Our tour guide took us to see a model of the Debating Chamber and then explained where all the MSP ‘s sit. Our tour guide then took us to the front desk to collect five tickets for us to go into the Debating Chamber where we saw Alex Salmond, Nicola Sturgeon and Mike Russell. It was very interesting. We couldn’t understand why the politicians were allowed to shout out when people were talking, it wouldn’t be allowed at Strone!

Shortly after we all went home with a marvellous apple each.

We had a wonderful day and learned a lot and would like to especially thank all the people at Glenfinart for working with us when we visited the garden.

Glenfinart Walled Garden’s fruitful partnership with local Strone Primary School has been in the news recently when the three pupils who are Strone Primary’s Eco Representatives were invited to the Scottish Parliament to celebrate Holyrood Apple Day.

The event, which brings together apple growers and enthusiasts from Scotland’s rural and urban areas, celebrates the fruit’s heritage. Strone School was one of only three Scottish Schools invited to attend. Earlier in the week Eco Representatives,  Duncan, Sky and Sarah picked the apples in Glenfinart Walled Garden which were later displayed in Parliament. After receiving a “Wee Apples” award, the group toured the building and attended a session in the Debating Chamber.

On the right is Strone Primary’s Eco Representatives’ account of their day in Edinburgh. 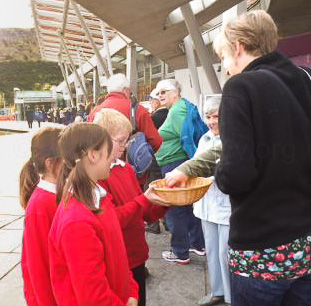 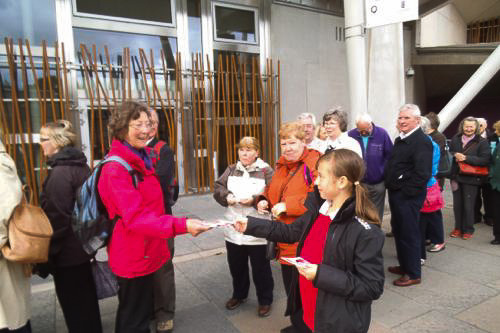 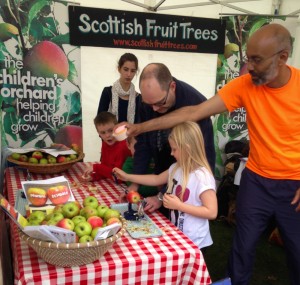