Glenfinart Walled Garden’s patron and friend, Sophie Thompson/Lumsden recently planted a plum tree in the garden’s fledgling orchard. She was also kind enough to share her thoughts on this special garden project:

The Glenfinart walled garden feels like it is reclaiming something so utterly nourishing for the local community, literally getting down to the roots of the enchanting place that is Ardentinny. [pullquote]It made us feel so honoured to be a wee part of such an awesome community endeavour.[/pullquote]

The inclusive nature of a garden that embraces all ages, something organic that lies at the very heart of the village, that everyone can be a part of and benefit from, is the sort of thing that can lift a spirit and make a person want to burst in to song! 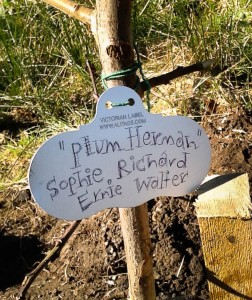 I spared Anna and Bill Williamson that as we went along on a bright day in February (Yes BRIGHT!) to plant a Plum tree. I just felt plugged in to something so special.

Visited said Plum with Mr Plumsden and the kids a few weeks later. It made us feel so honoured to be a wee part of such an awesome community endeavour.

An utterly fecund place for the roots of Ardentinny to be tended and flourish.

Sophie and her sister Emma Thompson are patrons of Glenfinart Walled Garden.

Any questions and information that anyone would like to ask of A.C.T. can be obtained by telephoning Bill, Convener on 810238 or Merle, secretary, on 810220.
Many thanks to ardentinny.org for providing news about Glenfinart Walled Garden via their website.
Merle Ferguson, Secretary, Ardentinny Community Trust.

I have just read the comments about the walled garden and would like to put the record straight about the Ardentinny Community Trust and the finance.
The Ardentinny Community Trust ceased to function in the 2008 to 2009 financial year.
Because it had charitable status the capital left was bequeathed to the Ardentinny Hall Association who also have charitable status.
They in turn gave One Thousand pounds of the capital to the Community Council to finance local projects, which we have contributed too.

A statement from the ACT committee will be issued in due course.

I don’t think anyone is suggesting that the village vote was 100%. When did a country vote in a government with a 100% turnout, unless it’s somewhere like Australia where you are legally obliged to vote, and even then?! The village voted for it by a majority and those who didn’t vote for it may be unhappy and that’s understandable but it’s the majority vote that carries. I don’t know the lady you are talking about but I hope there is not an element of ageism in your comment about her energy, and by implication, others’ energy levels.

A supporter. I would hardly call 92 responses a village vote.

Anna – Its such a shame that you choose to ignore the last part of my original comment. Can you confirm if you have an invitation only event coming up?

This old garden should have been handed onto the young lady that so badly wanted it and who actually had the energy for it.

Gerry and Gwen, knowing people’s true names alters nothing, millions of people do it everyday on the Internet but for what it’s worth I agree with your other comments 100%. Thanks for bringing us down to earth.

This debate on the walled garden and that on the tugboat with all the arguing and disharmony are the reasons why we do not take part in any committees or projects. We will happily support any activities which as Anna says will contribute to the good of the village but we came here for peace and do not want to be involved in these petty politics which only lead to ill-feeling.

This isn’t the kind of endeavour that I would want to get involved with but for those who do, good luck to you!

This is a personal response.
I feel it is such a shame that sigh is so negative about the “big garden”as it was called. The Ardentinny that I knew never wanted anything other than the good of their village and it seems that comments based on untruths can only cause division and disharmony. Please lets have our old proud village back united.

I never said i was against the Wall Garden its just the way its being managed! Have you seen a copy of this or last months Community Trust Minutes? The Treasurers Report where are these displayed? the public and Community Trust members are entitled to attend Community Trust Monthly Meetings when do these happen and where?

I have had a look and I see that the survey results can be found here http://ardentinny.org/category/trust_walled_garden/page/5/

Though not an Ardentinny resident, I have been a supporter of the walled garden project for some time now and have always found it to be open to everyone and anyone who wanted to get involved. It was also a project that was voted for by the residents. As I remember, there was a survey made of every household and I think the results are somewhere on this website. Community Trusts are in place to respond to and, where possible, action the wishes of the community and it seems to me that that is exactly what Ardentinny Community Trust did in response to the village vote.

I ahve to agree with Sigh this seems a very much a selected ‘Community Endeavour’ there are other simple less time consuming simple projects which could also enhance the village at a lot less of the cost. The Community trust really needs to address this!

Has anyone told Ms Thompson that this is not a “community endeavour” and that we are not all singing all dancing about this garden nonsense. It seems that this project is not something that everyone can be a “part of”. I do believe their is an upcoming event that is invitation only?