The Golden Cross was adrift today off Ardentinny. The historic tug broke free from its mooring off Ardentinny Hotel at around 5.50am this morning. She is now lodged on a sandbank off Sandy Beach.

Video footage of the moored tug was captured by the LochLongCam.com webcam, as well as her drift across the bay (see below). This is the second time the tug has lost its mooring. In August last year, the Golden Cross broke free and drifted on to the same sandbank. 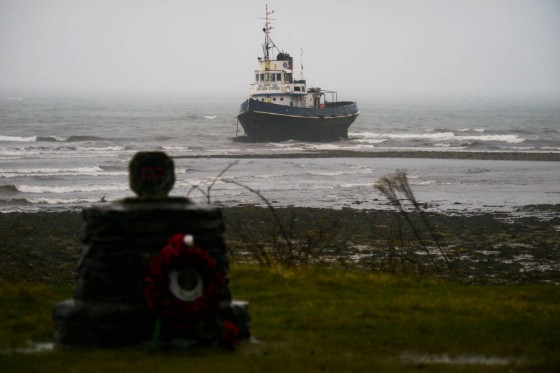 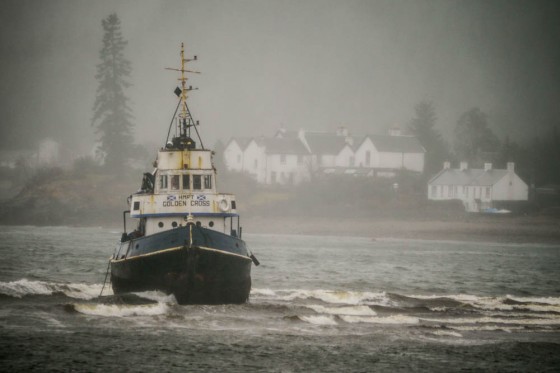 Linda, I agree with everything you’re saying about the GC. It’s had a hell of a history and doesn’t deserve to be facing the end of it’s life stuck on a beach on Loch Goil, spilling oil. I think it’s restoration was a great idea and the plans for it’s future admirable. My point is that it should never been dumped on Ardentinny. It never belonged here and was obviously never secure. With all the sponsorship White and Wong had obtained (over 80 organisations worldwide, even the Scottish Government) it should have remained safely berthed at the marina. It wouldn’t have gone missing last August and it wouldn’t be lying where it is right now waiting to be scrapped. The entire project would appear to have been managed by a bunch of amateurs and unless the owners can come forward and say something, I fear the GC has been abandoned by them; a tragic end to what was a fine vessel. I’m pleased we no longer have to look at it but sad at the way things have ended up.

what a shame that people feel so enraged of the rustbucket or whatever they like to call it. Golden Cross while she was in Cardiff gave joy to many children, in many capacities. Even to my brother in law who was a seaman,but a stroke left him not venturing too far, to have been given a sail across cardiff bay and when he could not get off was lifted up and over rails by the crew. Every who worked with golden cross loved her as did many officials who boarded her. I only hope more people in Scotland can support her and bring her back to glory because i am sure your children grandchildren and elders will have many an enjoyable visit aboard. Please do not argue and see what pride you will have in her. Good luck to you Golden Cross.

Maybe she’s exploring? Or maybe there wasn’t enough slack on the rope? Wait til low tide, see if she’s back.

Hello David, where’s she gone then? Not been around this afternoon but she’s not on the rocks and not on her mooring?

NEWS for the busy bodies , the tug will be refloated
Tonight at high tide and put back on her mooring ,
GET BUSY

If anyone wants to know about the Golden
Cross dont read or listen to chit chat ,come to me
Face to face and just ask and you will get
The real story

You seem to be moving away from the main topic here and are just having a pop at me for not using my real name. As I’ve said, I’m not making this a personal attack on anyone and i havn’t ‘slagged anyone off’, (I might have taken the mickey a little), I’ve given an opinion, which you seem to agree with, and as far as I’m concerned that’s my bit done.

If you want to raise a seperate topic regarding folks submitting comments under a pseudonym, feel free to do so.

If you want to make this “personal” then fire on, however it will be difficult for me seeing as your not using your own name…

I am actually not in support of the tug, Im not keen on it being here long term in its current state.

What I am against is slagging people off online, behind a username.

Ellie (if that’s your real name), I seem to have struck a nerve. I live in Ardentinny and I have a right to my opinion which I’ve expressed and i know that others in the village agree with my views. What difference does it make what my real name is! I have no axe to grind with you but if you want to make it personal go ahead.

Instead, why don’t you just put your views in writing as I have. I don’t want to know who you are, neither do I care, but I would be interested to read what you have to say in support of this rusting blot on the seascape who’s owners can’t even be entrusted to keep it safe.

If you so strongly object, come forward instead of hiding behind a computer screen and fake name.

Here we go again, the same as last time. Are the armchair sailors who are responsible for this Incredible Hulk going to own up and admit they can’t tie knots or blame the secret saboteurs of 2012 again. This wreck is becoming a bit of a liability now, as well as an eyesore, and if it can’t be moored safely here (let’s face it, it wasn’t exactly a hurricane last night) get it shifted somewhere else. Holy Loch? Or, seeing as the Joint Warrior exercise has just started, see if NATO would like to tow it away and use as target practice. What a fitting and honourable end that would be for the little boat.

It doesn’t look as though much is going to happen regarding getting the boat restored. Last year we were told it was going into dry-dock during the winter and come back looking like new. Winter was somehow missed, then it was April. April looks like a non-starter now as the official website says the owners ‘intend to arrange’ dry-dock for June/July. This intention to arrange doesn’t sound too definite to me. Can the owners tell us what’s really happening? Better still, just move it away from Ardentinny.

Please note time shown in webcam video is approx. 20 minutes ahead of correct time. It would appear that the tug broke its mooring at around 5.50am.

wpDiscuz
12
0
Would love your thoughts, please comment.x
()
x
| Reply
We use cookies on this site to enhance your user experience. By clicking any link on this page you are giving your consent for us to set cookies. Find out more.