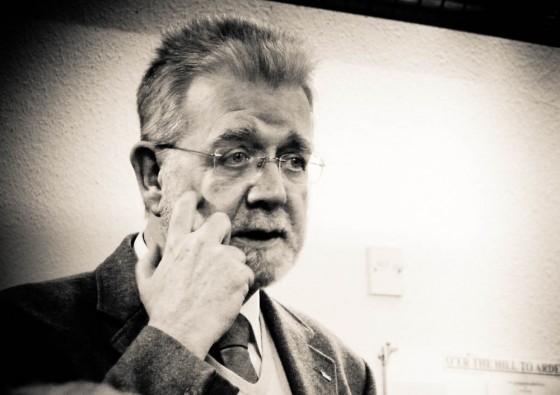 Recently, Ardentinny saw the first of MSP, Mike Russell’s ‘Yes’ meetings, which he intends holding in village halls throughout his Argyll and Bute Constituency. Despite bad weather, there was a reasonable turnout and Mike began by saying why he would vote Yes for an independent Scotland in 2014.

He then invited questions on any aspect of independence that the audience wanted to ask or debate. The topics covered were as follows:

Q.  Can we afford to be independent?

A.  Other small countries such as Denmark, Norway, Sweden and Finland do very well with broadly the same population as Scotland but with considerably less natural resources.  Scotland is an immensely rich country with as much oil reserves as have already been extracted; it has significant expertise in renewable energies, such as wind and wave power; it also has a strong manufacturing industry and 5 world class universities. So it is hard to imagine that a country with such wealth and ability would be unable to be independent. As it is, Scotland contributes more in tax to the UK government than it gets back.

Q.  Can you tell us the exact amount of tax which Scotland puts in each year?

A.  Yes, I can send you the government’s expenditure and revenue analysis for the year which is produced by the UK government. In the run up to the referendum the Scottish government is going to publish a full balance sheet for Scotland. We more than pay our way. For example, the number of soldiers stationed in Scotland after the latest defence revue will be 4,000. Scotland contributes three and half billion to defence and we actually get back less than two million of that.

Q.  Is there an intention of telling Scotland, in general, how things are going to work? How can people make a decision when there are so many unknowns at the moment?

A.  That is the case in any election. We are and will be putting out as much information as possible up to the referendum but, at the end of the day, people will have to make a judgement on that and by looking at how it has worked for other people in other small countries.

Q.  How will taxation work? For example, if companies have employees in Scotland and England?

A.  That can be done in a similar way as when you have employees in any number of other countries but one of the big advantages of independence is that we can do things differently. The tax code at the moment is very complicated and, with independence, we can look at it and decide how things can be improved. That is the case with almost everything and this is a wonderful opportunity for us to improve things.

Q.  If we got independence, would we be penalized by England?

A.  The relationship will probably improve. There is a saying that England will lose a surly lodger and get a good neighbour but the most important thing about the Edinburgh agreement signed by Alex Salmond and David Cameron is that both agreed to respect the referendum decision.

Q.  If you get rid of Trident, what will happen to the people employed in Faslane, for example?

A.  From the SNP’s point of view, Faslane would become a Scottish naval base, though other parties ruling Scotland in the future might have different plans. We would also need to develop other opportunities for employment, such as development of the energy industries.

A point was also made from the floor that the Norwegian navy has 31 ships of varying sizes all made by themselves, so something similar could possibly provide another employment opportunity for workers in Faslane and Coulport. 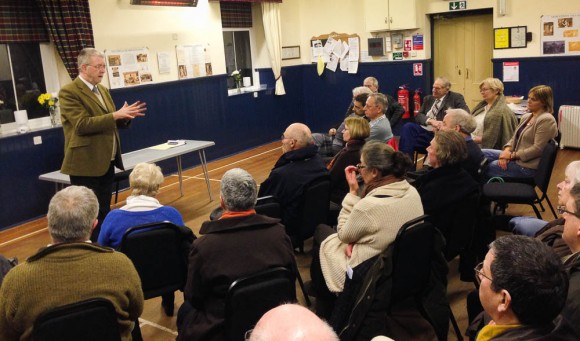 Q.  What would be the immigration policy in Scotland?  At the moment it seems to be an open door regarding countries outside the EU.

A.  It is far from an open door and some of the current policies are damaging to Scotland. For example, postgraduate students coming to our universities do so from a worldwide market and you want to attract the very best. However, David Cameron’s policies are stopping the very best people coming to study here. Also they very often pay to do so and so bring additional revenue as well as expertise and make an enormous contribution to our country. There have to be controls but also sensible immigration policies which will benefit Scotland which, at the moment, are outside our control.

Q.  If we got a Yes vote next year, how long would it take before we were able to run the country?

A.  If the vote for independence is affirmative in the autumn of 2014, general elections will be held in Scotland in May 2016. The important thing is that we wouldn’t be the first to do this. Lots of people have done this before and there are lots of ways from which we can learn how best to do it.

Q.  To be a member of NATO, are you required to have a military of a certain size?

A  No. you are not. You are required to make a contribution. We would first want to have a military force to suit our own needs, e.g., to protect our borders with a naval & air force and a basic army for civil emergency, as well as defence. We would also want to develop our military for international peace keeping. The estimated cost of all of this would be between two and two and half billion pounds. We would give people the opportunity to either stay in the UK forces or to come in to the Scottish forces.

Q.  Will there be a hand over period for the military and will you buy brand new ships or buy cheaper from elsewhere?

A.  First of all there is the question of assets. 9.3% of the military’s assets belong to Scotland and so there will be a period of negotiation on this and other issues. Will we take 9.3% of the national debt? If we can’t get assets, perhaps we shouldn’t take debt. So negotiations need to take place which will be negotiations between equals as we are not dependent, either financially or otherwise, despite the widespread myth that we are.

Q.  So there will be a transition period?

A.  Yes, there will be a considerable transition period.

Q.  What will happen to the BBC? Some people are concerned that they might not be able to watch Emmerdale etc.

A.  With a satellite dish it is possible to watch almost anything from anywhere. Scotland will first focus on broadcasting more of what is happening here, which is not being done at present. There will also be the opportunity to buy in and, as Scotland has a lot of fine broadcasting talent, it will be possible to make programmes for the home market and to sell out.

Q.  What will you do about the NHS?

A.   What we are doing now, i.e., protecting it from the worst that is happening elsewhere. The NHS in Scotland is being organised in a much more patient-centred way and we hope to deliver continued satisfaction. However, it is important to differentiate between what one political party sees as the best for the country and what voting for independence gives you. The latter gives you the opportunity to choose your own government with full powers to run Scotland on your behalf.

Q.  What is your understanding of the situation regarding joining or re-joining the EU?

A.  We are European citizens and that can’t be taken away. After independence we need to negotiate the terms under which we, as an independent country become a member. We already fullfil all the criteria, e.g., member countries have to have a fair justice system a police force etc. and we have those things. There may be other things we would like and these have to be negotiated but noone has ever been thrown out of the EU, it is just a question of negotiating the terms under which we want to remain in it. If we are an independent member rather than as part of the UK, we will have a full say in things for Scotland which is a much better and stronger position than the one we are in at the moment.

If you missed this meeting and/or have any concerns or questions, you can visit http://www.yesscotland.net/ for further information or drop in to the ‘Yes centre’ in Argyll Street in Dunoon (formerly Bloomers) where members of the local Yes team, which includes Labour for Independence and The Green Party as well as the SNP, will make you welcome with a cup of tea and a friendly chat.

A very accurate report of the meeting (in a nice warm hall!). I was the one who mentioned the 31 ships in the Norwegian navy. I was wrong. It has 70 ships of which 31 are large operational and armed vessels. They were all built in Norway (as were the British Antarctic ships).
But then again Norway is very fortunate to have discovered oil in its territoriail waters.