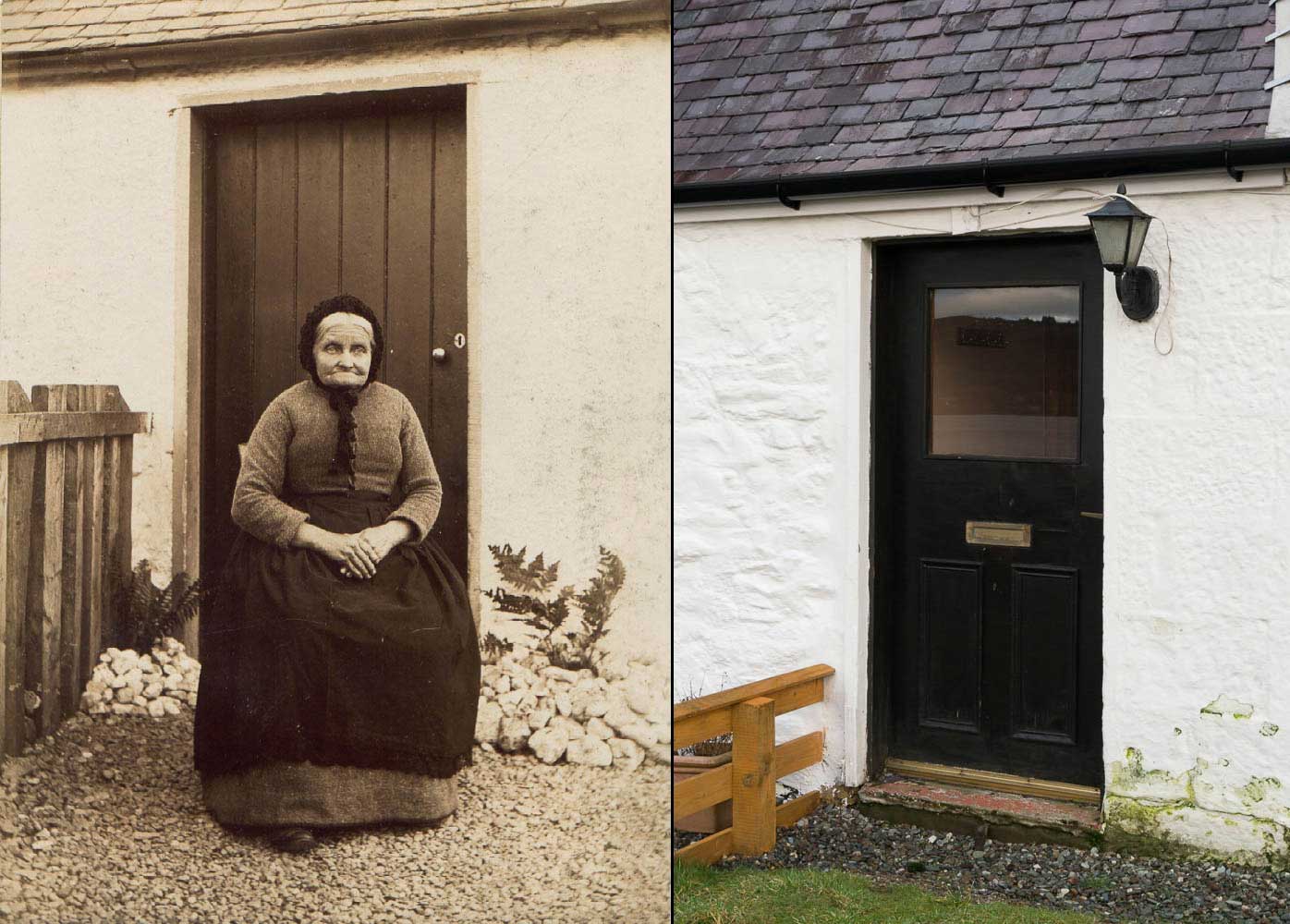 We are grateful to Moya Dewar, a descendant of 19th century Ardentinny residents, who has provided us with the following fascinating research web on her ancestors who lived at Glencairn Cottage and Glefinart in the late 19th century.

When Euphemia McKellar died in March 1898, the local paper wrote, under the heading of ‘Death of old Glefinart inhabitants,’ that she was ‘much respected in the district.’  The other death was that of her neighbour, William MacFarlane.  So, who was Euphemia McKellar?

She had been born c1824 in Greenock to John McKellar and Eupham Whyte: John McKellar was a ship’s carpenter whose origins are uncertain, but Eupham Whyte had been born at Inverchaolain and had then lived at Rashfield from the age of about 10.  Orphaned by the age of 15, Euphemia McKellar appears to have stayed on in Greenock for a year or two, after which she might have joined her two younger siblings who were being brought up by their maternal grandparents, Donald Whyte and Mary Campbell at Rashfield.

Meanwhile, Joseph Cairns (born in Glasgow) had married Margaret Thomson (or MacGlashan)* and was living in Ardentinny, initially working as a shoemaker and then on the Glenfinart estate as a saw miller. By 1841 they had four young children, but Joseph was widowed sometime after the birth of their fifth child in 1843. A widower with five young children clearly needed help in the home  – did he engage Euphemia McKellar as his housekeeper? He married her in 1846, they went on to have another 12 children and, remarkably, all 17 children survived childhood, although one died aged only 19 of peritonitis, and several others predeceased Euphemia.

Inevitably, most of the children moved away from the area, mostly to Glasgow (although one enterprising son emigrated to New Zealand in the 1860s, went gold prospecting and bought a farm there with the proceeds!).  After putting an appeal in an NZ newspaper a couple of years ago, we are delighted to be back in touch with one of his great granddaughters.  That it was a close-knit family is evidenced by two anecdotes: even the children from Joseph’s first marriage took their own children to visit Euphemia (Joseph had died in 1882), and the eldest of the 17, Margaret, was at the side of the second youngest, Catherine, when the 19-year-old died in Glasgow in 1885.  Also one of Margaret’s daughters sailed to New Zealand in 1909 and married a cousin there.

The photograph of Euphemia (above) was probably taken a year or two before her death, and she was sitting outside Octagon Cottage (so named because of its half-octagon roof), now Glencairn.

On a visit to Ardentinny in 2006, we brought an enlargement of the photo and were excited to see this confirmed – apart from the fact that it was the only property we could find with such narrow door jambs, all these years later the nicks in those door jambs match up exactly with the ones in the photo!

Two Cairns families were still living in Ardentinny/Stronvochlan in 1901 and Octagon Cottage was at that time the home of Euphemia’s daughter-in-law Joan and her five children – Joan’s husband, Alexander, had died ten months before his mother.

By 1911, however, only John (aka Jake) and his family were left, living at Glenfinart. A tragedy sadly occurred in this family in 1913 when John’s 16 year old son, Joseph, died: it seems he had fallen into the River Finart after suffering an epileptic fit. John, widowed just three years later, remained in the area until after his youngest daughter, Jenny, married in 1935.  The late Alistair Maclean of Ardentinny remembered  that his own sister was bridesmaid at Jenny’s wedding . He recalled Jake as a small quiet man who had been the beadle at the local church.  At the time of his death in 1944, Jake was living in Carluke in south Lanarkshire.

Several gravestones linked to Euphemia’s family can be seen in the kirkyard at Kilmun, including this quite imposing one for the Cairns family. Another gives details of Euphemia’s parents and siblings, yet another those of her Whyte grandparents.

Submitted by Moya Dewar, descendant of Christina, a daughter from Joseph’s first marriage, and Marion Lewis, of family descended from Joseph and Euphemia’s son Daniel.

I know this is an old post from 2013, but I have only come across it through Ancestry.com. Euphemia Cairns was my great great grandmother. Euphemia had a daughter also called Euphemia, she married an Alexander Webster from Angus and lived there life in Kilmalcolm Euphemia died in 1929. One their children was Catherine, my granny. Catherine married a Charles McDonald. They had two children Peter and John. John was my dad. Charles was killed in the First World War on the 25th September 1915. Catherine died in 1945. My dad died in 1977. Seeing the photo of my great great granny that I didn’t know about had the hairs on my neck standing up it was emotional also. I live in Wemyss Bay and hope to get the ferry over and visit Ardentinney and Kilmun very soon, and retrace some footsteps. Billy McDonald

Hi, I believe that Dugald Thomson or McGlashan is my third great-grandfather. Margaret Bannatyne was his first wife, who presumably died after giving birth to Margaret McGlashan or Thomson, the first wife of Joseph Cairns. I descend from Dugald Thomson’s second wife, Mary McNicol. He is listed as being a “Boatman at Ardintennie” on the birth of his second son Nicol Thomson. He may well have lived at the Ferry House or Ferry Cottage in Ardentinny. I don’t know why he should have two names. His father is listed as being a “Peter Thomson or MacGlashan”. My current belief is that this was a transition time where many people were assuming more anglicized alternatives to their surnames.

I’d like to get in touch with Jean Maskell. I am researching my Crawford ancestors who lived in Kilmun, some of whom were buried in the Kilmun graveyard. I was extremely interested to read that Jean recorded the gravestones and I would love to find out if any are related to me.

Thank you very much

We’ve passed your message on Jean!

A number of years ago I recorded all the gravestones in the old part of Kilmun graveyard. I have returned to the project and am now trying to connect gravestones and families. I was delighted to see Moya Dewar’s article and would love to know what other gravestones are connected to her family. I also saw the article on the Gardner stone by Janet Gardner Roy.