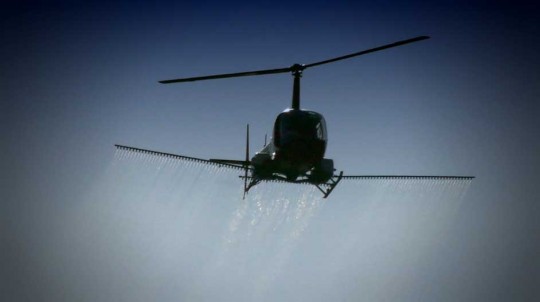 As aerial spraying has taken place in Ardentinny on two occasions in as many years without apparent forewarning to residents and visitors, Ardentinny.org has tried to ascertain what should happen should spraying take place in the future.

Following up on the information provided by two of our site visitors regarding the need for signage when aerial spraying is taking place, we contacted SEPA to clarify what regulations are in force in Scotland. We received a reply from Gayle Howard, their Media Officer – Communications who said she had checked with her colleagues in their land unit and that they had confirmed that the regulations do apply in Scotland and that it is a legal requirement that signs be erected.

We subsequently copied this to Russell Lamont of Forestry Commission Scotland, inviting comment. On the 12th September Russell Lamont replied saying that the helicopter team concerned had been consulted and that they had responded saying that appropriate measures to exclude the public from the spraying area were taken and this included the posting of signs. We followed this up requesting the following:

On 30th September Russell Lamont provided us with this response from Nicholas Hawkings-Byass of MFH Helicopters Ltd.:

‘I am afraid the question you have asked I cannot answer with any further accuracy since we are not obliged nor would we see any need to keep such records of where such signs are posted or alternative measures that may be taken. Please also bear in mind that after nearly 25 years of aerial spraying this is the first time that such information has been asked of us. I do not know the reason behind this request for information but if it is based on concerns with Asulam and aerial spraying then I would be more than happy to address these directly.’

It is our understanding that the aerial spraying company when applying for the Civil Aviation Authority (CAA) Aerial Application Certificate should detail the company’s procedure related to warning signs:

‘5.1.11 Warning Notices
The manual should detail the company’s procedures for provision and positioning of warning signs required to be placed within 60 m of the land to be treated so as to warn pedestrians, drivers and others of the activity.’

As Mr. Hawkings-Byass offered to deal directly with our enquiries, we wrote to him on 27 September and have received a response saying he will deal with the matter on Monday 3rd October. We continue to copy all correspondence on this issue to Russell Lamont of Forestry Commission Scotland and will report any further findings here.

One has to really appreciate their concern for the people affected.

“If it is based on concerns with Asulam and aerial spraying then I would be more than happy to address these directly.”

Why not discuss these concerns directly in your letter?”

“Please also bear in mind that after nearly 25 years of aerial spraying this is the first time that such information has been asked of us”.

Asulam was declared not approved by the “Commission Implementing Regulation (EU) No 1045/2011 of 19 October 2011 concerning the non-approval of the active substance asulam, in accordance with Regulation (EC) No 1107/2009 of the European Parliament.

My personal opinion is Pharmaceutical companies are not overly concerned where their carcinogens are being sprayed as they are not the ones doing the spraying.