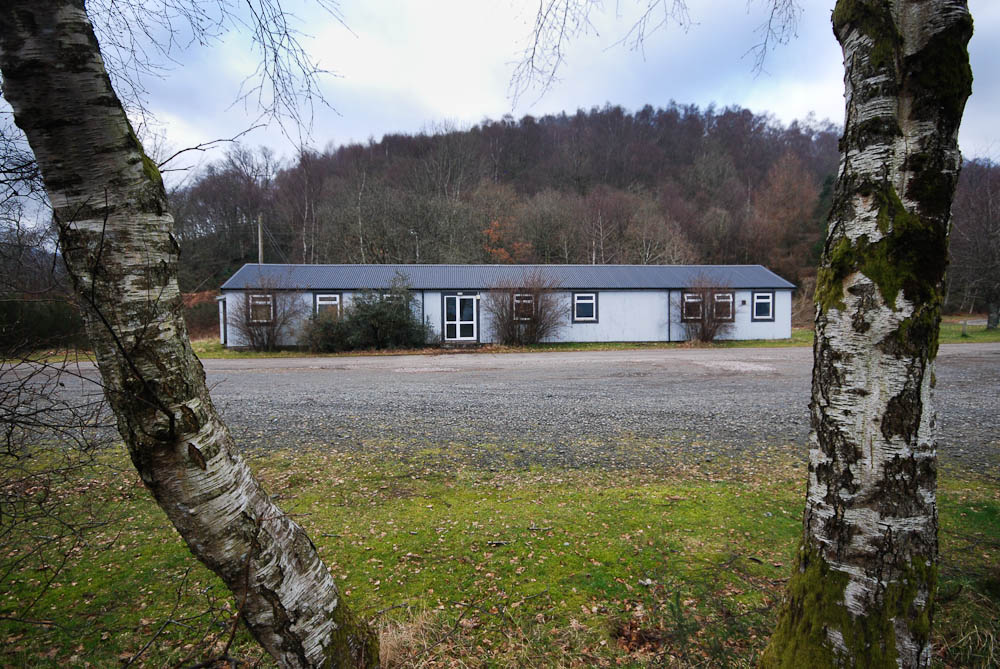 A link to Ardentinny’s historical past will be lost within the next few days when the last remaining long hut at Glenfinart Bay, Ardentinny is demolished. We understand that the work will commence as soon as electricity to the building has been disconnected. The hut will be removed and replaced with top soil. The commando memorial has been moved temporarily near to the HMS Armadillo information board.

The 70+ year-old corrugated iron structure was one of several constructed as part of the War Office camp. In 1942 it was transferred to the Royal Navy and became HMS Armadillo. The camp provided training facilities for Royal Navy Beach Commandos whose job was to go ashore in the first landing craft and establish a protected base for the Beach Commander to operate from. The nearby Glenfinart House was also requisitioned as the headquarters of HMS Armadillo. Loch Long was used for amphibious landing drills; training in reconnaissance; and specialised beach skills.

The camp accommodated some 500 to 600 men and women, one of whom was June Brown (‘Dot’ of Eastenders fame), who served as a Wren at Ardentinny around 1944. Her job was to teach sailors survival skills as well as show training films to pilots on how to land on aircraft carriers!

After the war, the camp was used as accommodation for the unemployed who were retrained as forestry workers.

In 1959 one of the original long huts was dismantled and moved to Uig (near Benmore Gardens) where it is still in use today as a community hall. Another of the huts, sadly now in a dilapidated condition, was also moved to Stronvochlan some years ago.

Latterly, the last remaining long hut was used by the Forestry Commission. Interestingly the hut still retains an area which was used for post mortems on animals as well as shower and toilet facilities for the workers.

In 2003 Forest Enterprise and Ardentinny Development Trust explored the possibility of the long hut being used as a visitors centre, incorporating a cafe; craft workshop; and sales area. At the time Forest Enterprise had £50,000 available to upgrade the premises, most of which would have had to be spent on upgrading the water supply and provision of new toilets. In order for the Development Trust to raise additional funding for the project, a commercial feasibility study would have had to be carried out at a cost of around £8,000. The plan was eventually shelved as it was not considered to be commercially viable.

What a shame, all that history gone.

My Late Father trained at HMS Armadillo during World War Two as a Royal Navy Commando. Luckily I have many old photographs of the Base and also most of its history.