This postcard published by M. Gardner of Ardentinny Post Office was mailed by a holidaymaker to a Kilmacolm address on 23 September, 1909. The Old School can be seen on left of picture. Can anyone name the donkey? 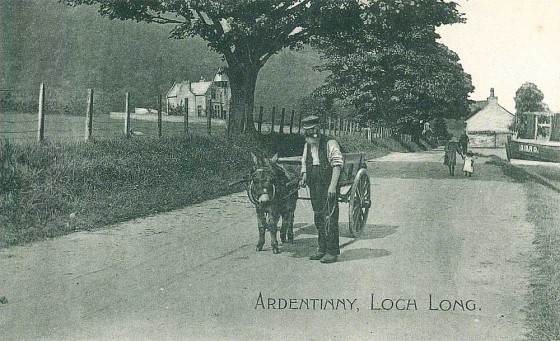 The following was provided by Ian MacPherson-Blane whose mother lived in Ardentinny in the 1920’s.

There is an entry on the History page made on 26th January 2011 with a photograph of a man with a donkey. What a wonderful old photograph. My mother liked it and didn’t think any more of it until a week or so ago she had a memory of writing a story about ’The Cuddy Gates’. Here is what she wrote. With an explanation by me (and her) in italics below it.

Cuddy Gates was through the Big House Estate and down the brae, over the bridge and up to Seaview. It was so named because in earlier days it was always where the donkey carrying goods was stopped and unloaded. (A donkey’s other name was a cuddy).

It was also the place where the bus stopped before going up the glen to let passengers get off or get on. This is where we got our school bus at 10 minutes to 8 in the morning and off at 5pm at night. Sometimes the bus went up to the top of the glen, other times it turned at the Steading and other buses went to Ardentinny Post Office.

31/12/17 – I have just spoken to mum about the wording of this and we agree she has written it from the point of view of a young girl who lives at Seaview and the journey she takes from the Cuddy Gates to her house. What she was trying to say is the Cuddy Gate was the back or tradesman’s entrance to the Big House.

It was only the other day that she came through holding her story in her hand and exclaiming she knew she maybe had something about that donkey pictured on the Ardentinny.org website. She remembered she had written about the association of the Cuddy Gate and the Donkey.

So there might be a connection. Who knows. I do like the reply from Melanie Melvin on 3rd November 2011 about the names of the donkey. And interesting her grandmother stayed at Glenfinnart until 1926, the year after my own mother went there to live.

I believe the donkey is either Saco Bono (a veteran of the Boer War) or Brutus – my Grandmother lived at Glenfinart 1909-1926 and I was just reading her memories of ‘A childhood in Argyllshire!’

One of the star characters in Winnie-the-Pooh. (maybe spelt Eeyore, not too sure). A bit before my time too!

Can’t really say.. a bit before my time 😉 Where did “Eyore” come from?

…wouldn’t be Eyore would it?