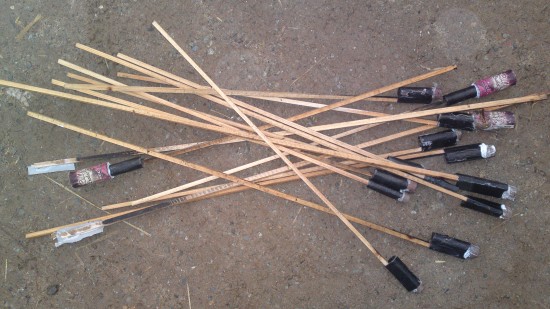 The New Year fireworks display at Glen Finart Hotel put the horses at Dun Daraich Stables in a state of fear and alarm, they reacted very much as I had predicted and had previously advised the display’s organiser they would, when I expressed my concerns and objections. Despite this, the event went ahead.

The repetitive loud bangs echoing up the glen along with the explosions of light so startled and alarmed the horses that they took flight and galloped around their field in blind panic for the whole duration of the display, some 15-20 minutes.  The horses stabled spun around and around calling wildly to their companions.  As I had thought it would, the display caused them to show signs of distress, fear and alarm placing them at risk of injury and illness and yet I was powerless to prevent it.

As a natural prey species, the horse is pre-programmed to react adversely to any unusual object, noise, or movement, particularly any that approach the animal in an unexpected manner. Moreover, the faster the approach, and the louder the noise, the worse the perceived threat.  Little wonder then that horses are terrified by the whizzes and bangs created by firework displays. And the consequences of this fear can be catastrophic – a panicking horse can easily endanger its own life.

I contacted Police, Environmental Health and the British Horse Society (BHS) in connection with my concerns, I have also sought the support of the Ardentinny Community Council in objecting to fireworks being set off near the horses in future.

The Dunoon Police advised I speak directly to the organisers about avoiding future distress to the horses as there appeared to be no legislation applicable in the circumstances.

I did however find the following advice from Police in a newspaper article from searching nationally:

Don’t set off fireworks near horses
Published Date: 23 October 2009
KEEP your fireworks away from horses.
That is the warning from police who say Bonfire Night can be stressful for the animals and their owners.

They are urging people who are planning on celebrating with fireworks to tell nearby horse owners. They also say fireworks should not be let off anywhere near fields or farms.

“Those who really want to have fireworks in their back garden should think carefully about how it will affect the local animals before they do so.”

Environmental Health advised similarly to the local Police as it appeared the display was unlicensed but did ask the category of fireworks involved and whether or not there was an entry fee for the display.

The BHS advised of the following:

“There is strong circumstantial evidence to suggest that fireworks have been the cause of serious equine injuries, and even deaths,” says Wendy Peckham of the BHS.

“Cases which have been brought to our attention in recent years include a horse having to be destroyed after breaking a leg following a fireworks event, horses suffering from severe colic following a local fireworks party and a mare who had to be put down after a she broke through a fence and suffered severe injuries.”

Rebecca Lucas at BHS Access Welfare and Safety Department advised me of a case where a pony in blind panic jumped out it’s field and ran into a lamp post, the resultant injuries meant the pony had to be destroyed.

The BHS in their awareness raising about the dangers of fireworks to horses advise horse owners:

“Wherever possible, tell neighbours and local firework display organisers that there are horses nearby, so they can ensure fireworks are set off in the opposite direction and well away from them.”

“It may seem common sense but be aware of your own safety; a startled horse can be dangerous.”

They advise the general public and those organising fireworks display:

“Anyone organising a firework display should inform local horse owners. It is also a good idea not to let fireworks off anywhere near fields or farms.

“Most people don’t realise how much suffering fireworks cause to animals, particularly horses and those who really want to have fireworks in their back garden should think carefully about how it will affect the local animals before they do so.”

More information on the laws related to fireworks visit: www.dti.gov.uk/fireworks

A poster to raise awareness of the dangers of fireworks around horses can be downloaded from the BHS website.

The BHS has also requested that I fill in an incident report form as they collate information regarding problems for horses with fireworks and lobby for change to current legislation.

I have written directly to Mr & Mrs Kennedy appealing to them not to host further displays or to set off fireworks in Glen Finart and at such close proximity to Dun Daraich Stables where horses are kept. I hope that I have local support in doing this.

Editor’s note:  We have contacted Mr & Mrs Kennedy of Glen Finart Hotel informing them of the publication of this open letter and inviting them to respond.