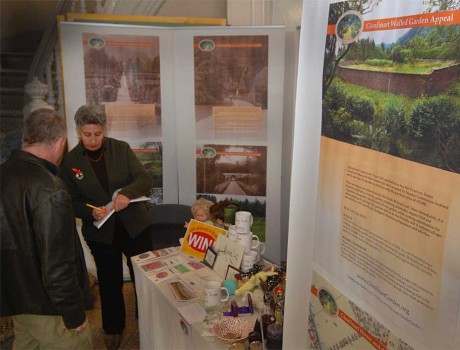 Dunoon’s first Green Fair was also the curtain raiser for the first in a series of fund-raising events in aid of Ardentinny Community Trust’s Glenfinart Walled Garden Appeal. Manned by Ardentinny volunteers Anna Williamson and Chris Emmett, the Burgh Hall display included exhibition panels detailing  the history and aspirations of this ambitious project, as well as the sale of a selection of original arts and crafts generously donated by local artists Elizabeth Bruce, David Morrison, Anne Hamill and Anne McLintock

As one of the main aims of the garden project is the production of organic produce, the Green Fair was an obvious choice for launching the appeal. The initial target is to raise the £10,000 purchase price of the land within the next 18 months, however it is estimated that the restoration of the Victorian wall will be at least an additional £150,000. Over the coming months the Walled Garden Appeal will be participating at events throughout the Cowal area with the next appearance this Saturday at the Christmas Fair in Colintraive Village Hall. More information at www.GlenfinartGarden.org.