1. The spraying is to control the spread of bracken.

2. The spraying is being undertaken on Forestry Commission ground, which is tenanted by Mr Marshall.

4. As I have already indicated in this instance FCS were unaware of the operation prior to it being undertaken. If this operation takes place in the future we have indicated we must be informed. This information will be conveyed to the community.

I understand you have been informed that the helicopter operations highlighted on your web site, dated 8th August, were being undertaken on behalf of David Marshall.

We were unaware of the work and temporarily suspended the operations until we were satisfied that all the relevant paperwork was in place. I can confirm all the necessary requirements have been met and we are content to allow the operations to continue.

I have been informed this may be as early as 13th August, depending on the weather.

8 Aug.  A helicopter (reg no. G-WEGO) could be seen over Cnap Reamhar (the hill behind Ardentinny village) on Sunday afternoon in what appeared to be aerial crop spraying. Hopefully the Forestry Commission will be able to provide us with more details on this shortly. 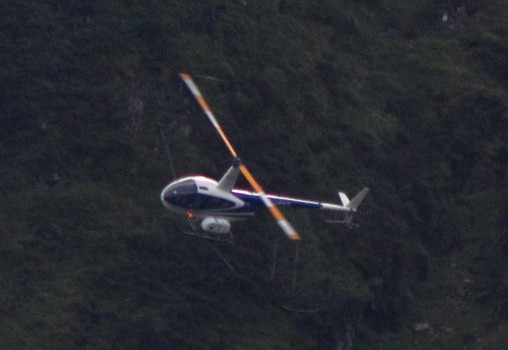 The Forestry Commission have told us that the spraying was not undertaken by them. They are investigating and hopefully will have more information shortly.