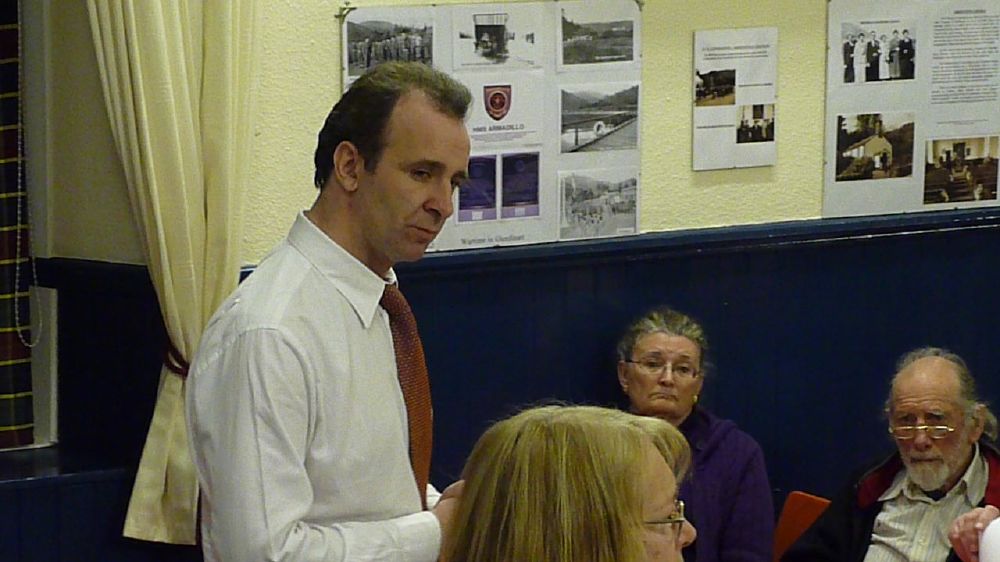 A 50-strong gathering of Ardentinny residents expressed dismay and more than a little frustration at the Public Meeting held in the village hall on Tuesday 26th January. Dismay at the continued, albeit scaled down, proposal to build 10, as opposed to, 36 affordable housing ‘units’ in a village with no employment opportunities and a distinct lack of amenities. Frustration at the perceived lack of transparency and willingness by The National Park Authority to respond to officially posed questions and expressed concerns.

The meeting was chaired by Community Council Convener, Val Kennedy. The National Park Authority was represented by Gordon Watson, Director of Planning and Rural Development; Terry Levinthal, Chair of the Planning Committee; and Diana Worthy, Planning Officer. Gordon Watson opened the meeting with a presentation on where they are in the planning process. He stated that the driver for their current housing policy is concern at population decline within The National Park and, in particular, the decline of householders and people of working age.

Community Councillor and Working Group Member, Dennis Gower, spoke on behalf of the Community Council. He noted that of the total responses the Park had received, over 20% had come from Ardentinny and he said that while the village was not against housing full stop, the majority was against housing in Ardentinny in its present state. He commented that the Community Council had sent a formal, reasonably detailed response re the Draft Plan in which they asked 10 clear succinct questions which they thought deserved an answer or some kind of reasonable explanation. This has never been received and the Community Council shared the Working Group’s frustrations at the stalling tactics of the National Park when asked to provide answers to their questions and concerns. He also quoted from the Scottish Government’s response to the Consultation in which it said that the National Park had not provided a clear justification for the allocation of housing within particular areas, of which Ardentinny is one. He thanked the Park Authority for finally agreeing to come along to the Public Meeting and asked that they give full consideration to what the residents had to say and to adhere to the primary aims of the National Park which are to conserve and enhance the culture and heritage of the area. He also asked that they apply a great deal more common sense, which received loud applause.

Why Ardentinny?
Argyll and Bute Councillor and Conservative Parliamentary Candidate, Gary Mulvanay asked the question ‘Of all the places in this big National Park, why Ardentinny?’, particularly when there was such a clear steer from the community that they did not want this proposal. He asked what the driver was? For example, was it people in work who needed housing in the area? Councillor Bruce Marshall responded by saying that, in his youth, Ardentinny was a vibrant, viable village with jobs, kids, a school and post office which have all gone because there are no young people. He suggested that now the village was dying on its feet. One resident suggested that it was a work thing, not a housing thing. Gordon Watson said the driver was the housing need identified by Argyll and Bute Council and that within Argyll and Bute there was a shortage of suitable sites. They had identified this site in Ardentinny as one that would be suitable. This was an issue that became increasingly more obvious as the meeting progressed, i.e., that Ardentinny had been earmarked for affordable housing more because of the availability of a suitable site, rather than in response to a housing need, particular to Ardentinny.

A vibrant village not a dying one
There was strong objection from the floor that Ardentinny was a dying village. One resident cited the vast amount of talent in the village, small businesses, artists and crafts people and said that, while Ardentinny is a changed village, it is a very vibrant, going forward village. A view which was strongly supported by the majority.

Apology and lessons to learn
One of the residents reiterated the concern that the Park Authority had not responded to the questions posed by the Community Council and suggested that, had they been more open and provided answers to questions, it would possibly have saved a lot of time and angst and avoided the rather confused and hostile environment the Park representatives found themselves in. Gordon Watson stated that it was never the NPA’s intention to mislead the community or not respond to questions and said he could only apologise if things had been missed in how they responded to responses and they hoped to learn lessons from it, with regards to how they handle responses in the future.

Many other issues were touched on ,e.g., flooding at the site and the impact on nature; the national criteria for access to affordable housing; house types etc. would depend on agreement between the housing authority and housing association; and that local authority housing needs would dictate. However, it would appear that one of the overriding reasons for selecting Ardentinny as a suitable location for affordable housing was the identification of a suitable site at Lochview.

The Finalised Draft Local Plan consultation begins on Friday 19 February 2010 and closes on Tuesday 6 April 2010. Response forms and all relevant documentation will be on the National Park website at that time. There will also be a Local Plan Drop In Session on 24 February in the Younger Hall, Kilmun. 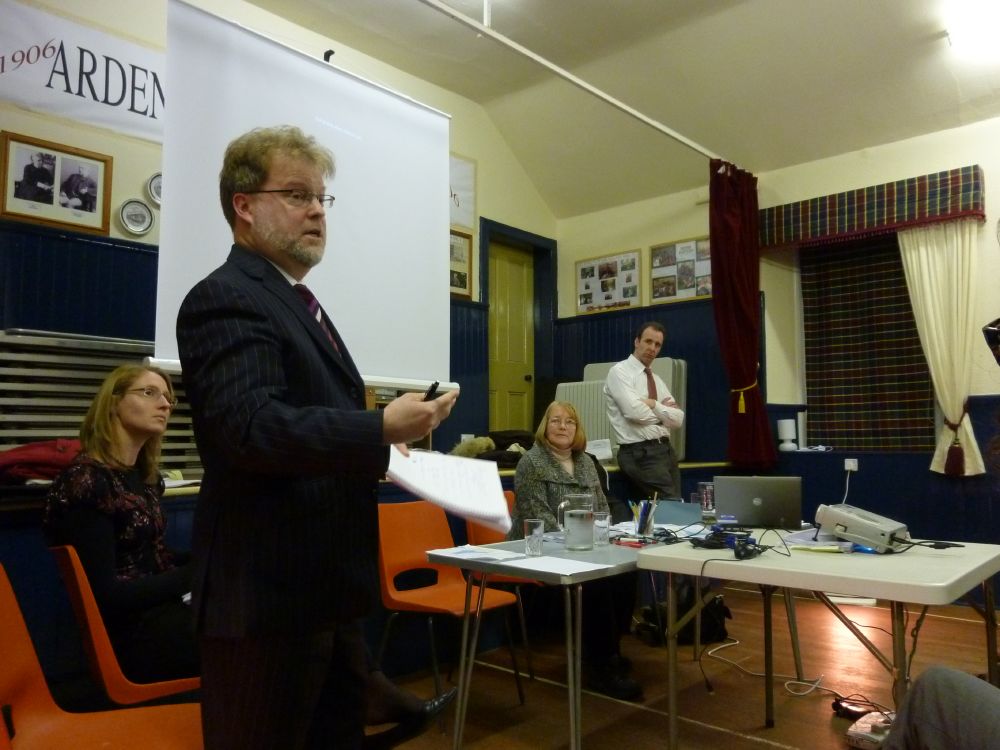 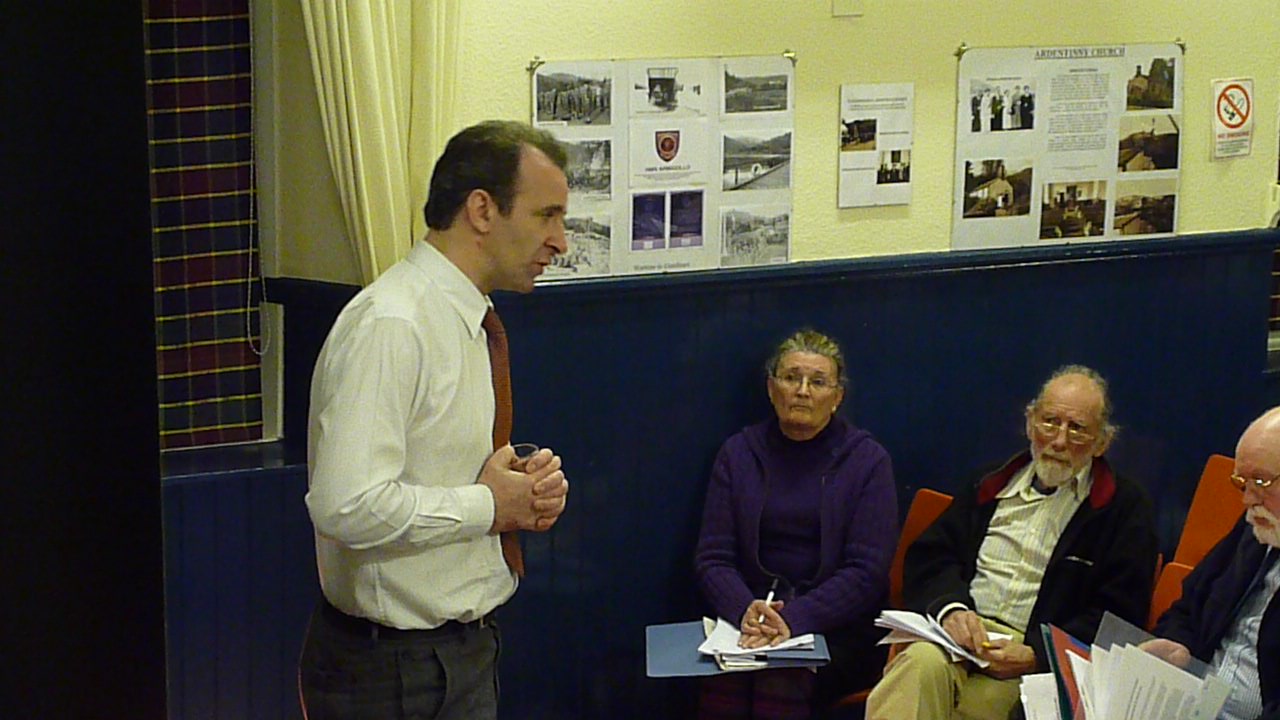