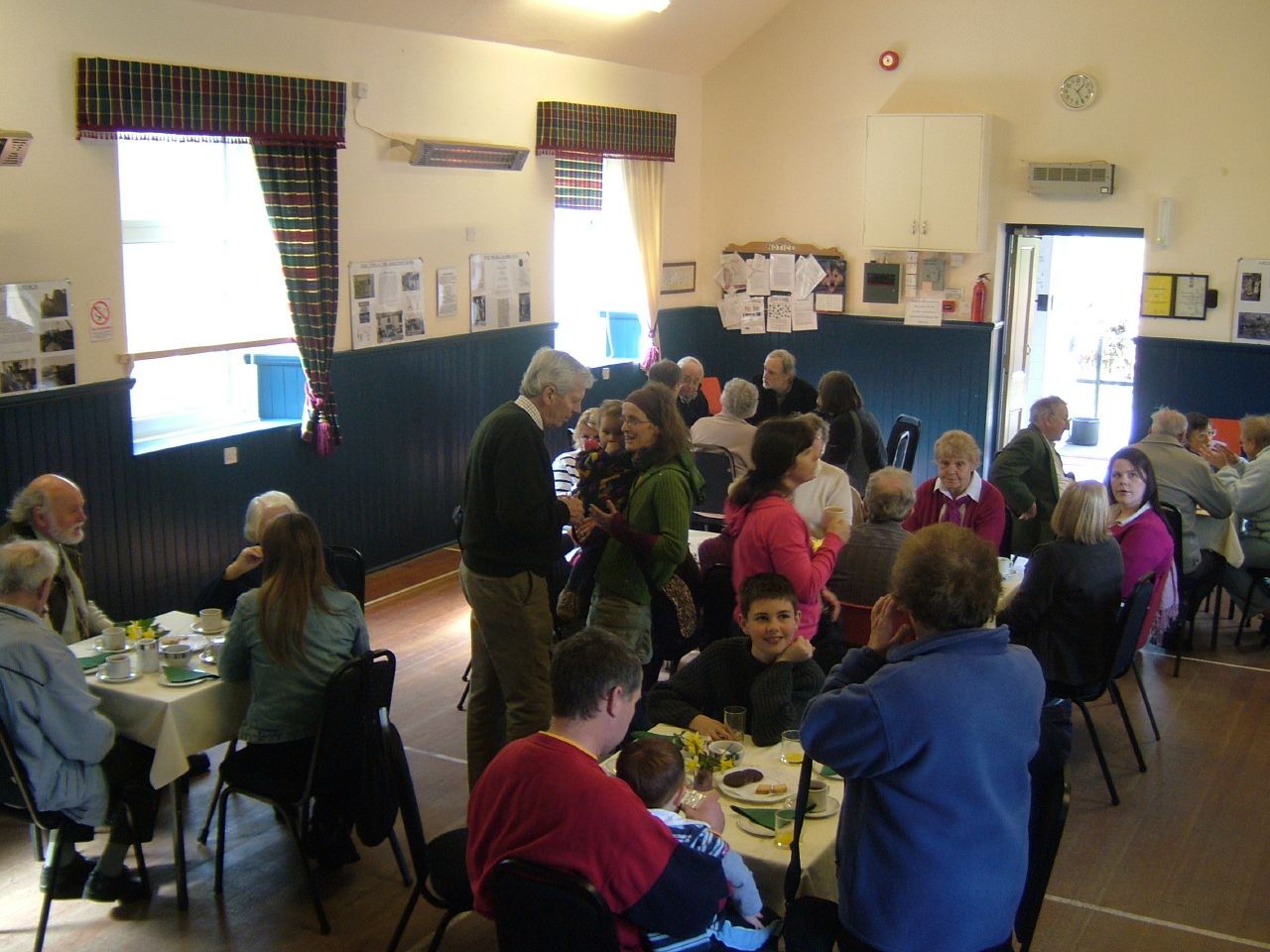 “Wood hill and dale combine to form and diversify the tranquil loveliness and peace-breathing solitude of the celebrated Glenfinart. A little inland (from Loch Long – Loch of the Ships) , nestling in an attractive position, is Glenfinart House, a building in the mixed English mansion house style with a nice green sward stretching down to the bay. On the road opposite to the House is a very pretty waterfall whose water, clear as crystal and refreshing as wine, prove a boon to the traveller on a dusty day. The view looking up Glenfinart is truly fine with bold irregularity of mountains, tufted woods hung over precipices and untrodden valleys, destitute of all appearance of human habitation save the lonely farm steading which skirts the mountain base. On the opposite shore is Coulport where the glass ‘Palace’ at the Glasgow Botanic Gardens was first erected.”
From Inglis’Guide to Dunoon revised ed. 1907.

When Inglis guide was published, Glenfinart House, seven farms,(sheep and dairy), High Cottage (the dower house), Ardentinny Hotel and a number of cottages were the property of Captain John Leschalles. In June 1904 he and his wife had taken up permanent residence in Glenfinart after the death of his father, Henry, a successful businessman from Surrey. (At the age of 60 in 1883, Henry bought Glenfinart as a second home and shooting estate.) In her beautiful and nostalgic memoirs, Captain Leschalles’ second child, Sheila, born at Glenfinart House in 1909 writes about the Village hall:

After my grandfather died, a new building was contructed on the estate at my grandmother’s instructions as a memorial to him. It was a hall for the use of the village. Various meetings and lectures were held in it but the principal event, as far as the family was concerned, was the annual Christmas Treat for the staff. For this the hall was elaborately decorated. There was a huge candle-lit Christmas tree in the corner, laden with wrapped presents, and the long tables, covered in white cloths and benches along both sides were laid with an enormous tea’.

As they planned the opening of the new Glenfinart Hall on 8th August, 1906, the young Captain and his wife may well have been expecting their first child. According to the Ardentinny Parish Magazine , the opening was very successful. The ‘commodious beautifully decorated hall’ was crowded for a supper and dance. Toasts were made to the success of the hall and to the health of the Captain’s mother . The hall’s first function , on 24th August,was a concert at which a Miss Charlotte McNicol gave two pianoforte solos, there were numerous singers and Mr Beaumont Leschallas gave selections on his gramophone. The concert raised 11:19:6 for the Church Music Fund.

That same summer of 1906, the 58th Glasgow Company Boys Brigade camped for a week at Barnacabber Sheep farm (now a hotel and deer farm)in stormy weather , while across the Finart was a detachment of the Royal Navy Reserves, Clyde Division. Did any of them know that the massive rock beyond their camp was an iron age hill fort called Dun Daraich (the oak dun) and that its occupants may have navigated a flooded plain around it, by flat bottomed ‘birlinns’ ? Possibly they were told that Norsemen from King Haco’s fleet anchored in Loch Long and plundered the glen before the Battle of Largs in 1263. Perhaps they hiked the five mile drover’s road to Loch Eck, imagining what it would be like to drive cattle over the glen with no maps and living on oatmeal, onions , whiskey and cattle blood! Maybe they pretended to be the soldiers of Montrose and McColla who came foraging over the same road in 1645. Did anyone show them the cairn and tell them about the murder, in 1685, on the night of a Ball at Whistlefield Inn, of Glenfinart’s finest athlete, Baron MacInturner, from the farm of Craighoyle? Coming back to their camp to explore the shore of Loch Long, they may have learned that in 1749 Archibald McCauslane, the ferryman at Portindornag (Knap) charged a single foot passenger 3pence, a man and horse 6 pence , a cow when bound and laid 2p, when standing 21/2 p, and three sheep 1p. ! Did they learn about the great herring season and the fishing smacks which came every year to Loch Long?

The Boys Brigade may have stopped in 1906 to make a wish at Fingal’s Well or visit the Laird’s Grave on their way into Ardentinny to buy Cadbury’s chocolate from Mr Gardner at the Post Office shop opposite the hotel. They would have watched the ferryboatmen row out to the paddle steamer which came each day bringing post, goods and passengers. Perhaps they took the ferry to Coulport as well. When they marched passed the newly built hall and arrived at Ardentinny Church on that July Sunday 1906, they may have seen Captain Leschalles and his wife because this would have been before Mrs Leschalles fell out with the local Minister Mr Mitchell , (it seems he had been rude to her), whereafter the Leschalles family attended church in Dunoon much to the discomfort of Sheila who suffered travel sickness.

24th August 1906, after the Boys Brigade returned to Glasgow, was a day of ‘the most brilliant weather’. The Children’s Treat and Sports on the lawn of Glenfinart House included ‘numerous events before a large crowd of onlookers’. In 1906 the village school had no electricity, far less computers! We can imagine oil lighting and a large coal fire to keep the local children warm as they bent over their books in the winter months ahead. What difference did the Village hall make to the lives of those children and families who lived in Ardentinny and Glenfinart that winter? Since then, for one hundred years, meetings, concerts, dances, clubs, Burns Suppers and Village Flower Shows have made its walls ring with laughter and pleasure. In Winter 2006, there will be hardly an evening in which the hall is not in use – be it for yoga , bridge, photography, art, crafts, badminton, indoor bowling or the most recent novelty – the quiz night ‘Canned Haggis’ Ceilidh Band has already been booked for the Burns Supper 2007.

Between August and November 1914 Captain Leschallas of the 19th Brigade of the Expeditionary Force in France, wrote home to Glenfinart: ‘I would give a great deal just for a stroll round the garden for half an hour in https://ibebet.com/za/online-casinos/.’ ”Some day I shall hope to explain it all to you, the noise of shellfire and high explosive is terrible’. ‘ Thankfully he returned home to his family in September 1915. However the simple Celtic Cross which stands at the roadside by the entrance to the Dower House lists the names of the Ardentinny men who did not return. Much water has flown under the now renovated Stronvochlan Bridge over the Finart. The Boy Scouts (yet to be formed in 1906) now stay at the village hall rather than camping but they have one hundred years more history to learn in our Age of Information Technology ,including the complexities of Trident submarines and weapons of mass destruction housed in silos across the loch at Coulport. Since 1973 Ardentinny Outdoor Centre has provided sailing, canoeing, mountaineering and ecological studies for children at a formative age. The hills are now forested and harvested. Many more houses have been built and the demography of the glen and village has changed.

And what of the future? When the second centenary toast is raised in the village hall, in one hundred years time, maybe by some of the children of our grandchildren, what story will they tell? Perhaps the sonnet to Glenfinart penned by Captain Leschalles’ daughter will have been put to music and become as well known as that of Robert Tannahill’s ‘The Lass o’Aranteenie’ ? The Tenants, Employees and Residenters who welcomed Captain Leschallas and his bride on 24th June 1904 would be pleased to hear of the possible restoration of the beautiful walled garden which ‘contained herbaceous borders of all sorts and sizes, a vegetable garden and large glass houses containing fruit including a grapevine.’ Having witnessed an electric power house,run by water power being built in 1920 they would be intrigued by the current investigation into Wind Power for the Village Hall. Would they support a new ferry to allow nature lovers to embark and walk with respect through their beloved glen.? Today in Glenfinart there is a livery stable beside (and named for) the Iron Age Fort. Further up the Glen there is now a fascinating wood turning cottage industry. Below the house there is an indigenous wood , created by friends and dedicated to another young woman , Hilary Smith, a dedicated instructor at the Outdoor Centre who died tragically at Gairletter.
The wood is open to all to walk where:

‘heather’d mountains stained with purple glow slope down to wooded uplands cool and free while through the fragrant meadows, singing low the river runs to meet the shining sea, and dawning day yields heart-free happiness Till dusky gloaming brings the peaceful night. Dear land that taught me love in loveliness and laughter born of liberty and light.’
Sheila Wingfield
The Village Hall Committee, August 14th , 2006.